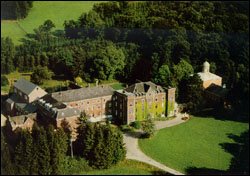 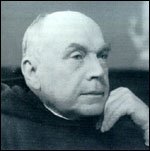 The community was founded by Dom Lambert Beauduin, one of the pioneers of the Liturgical Movement. Dom Beauduin did spend some of his formation at Maredsous, and was influenced by Dom Columba Marmion. According to the history given by the websites:

The monastery of Chevetogne was founded in 1925 by Dom Lambert Beauduin (1873-1960). This monk of the Benedictine abbey of Mont César (Louvain), previously was deeply involved with the liturgical movement in Belgium. When he came to know the Christian East he realized the extend to which the Churches are divided and started to work for a foundation of a monastery
devoted to Christian unity.

The pontifical letter "Equidem Verba" of Pius XIth to the abbot primate of the Benedictine Order drew attention to the importance of Christian unity and presented the opportunity to accomplish this project. In December 1925, Dom Lambert Beauduin was able to settle down in his foundation, together with a few fellow monks, at Amay-sur-Meuse (diocese of Liege). From there the community moved to Chevetogne (diocese of Namur in the Ardennes) in 1939. On December 11th, 1990 the Priory became an Abbey.

Read more about the history. Dom Beauduin's place in the Liturgical Movement should not be neglected, but I will devote a separate post to him some time. He placed great emphasis on the cultivation of a liturgical spirituality. Chevetogne was one of forerunners of 20th ce Catholic ecumenicism, aimed specifically at reconciling Catholics and Orthodox, with two different groups of monks worshipping in the Roman and Byzantine rites.

I remember seeing a picture of the interior of the Byzantine church, but the relevant part of the new website is under construction. (Moreover, I found no such pic on the old website--overactive imagination?) I thought the Byzantine church looked better than the Latin church, especially since the Latin church was built recently, and appears to be have been built with the spirit of the post-conciliar liturgical reform. Then again, I usually have a strong preference for Byzantine and Eastern architecture; Latin styles beyond the Romanesque are not as appealing, especially when it comes to the placement and design of the altar. (Especially altars with large reredos.) Here is the old page for the Byzantine church.
Some photos of the community's past from the new website; Dom Beauduin:

From the old website, plan for the Byzantine church: 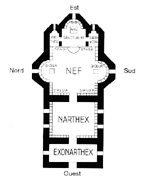 Icons from the iconostasis: 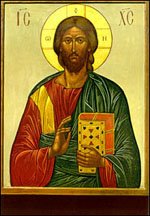 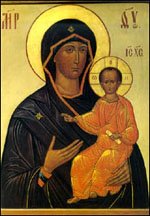 The icons of the Iconostasis in Chevetogne were painted by the Russian painter George Morozov (1900-1993). The two major icons on either side of the central doors are of Christ, and of the Blessed Virgin Mary, Mother of God, worshipping her son. 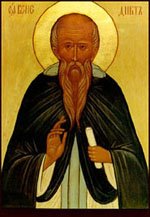 Dom Beauduin's book, Liturgy the Life of the Church, is published by St. Michael's Abbey and distributed in the U.S. through St. Augustine's Press.

They sell CDs of their chant and other items online. I do not know what period their chant is from, but it sounds to be of a more recent origin--my guess is that it is the same as the contemporary chant of the Russian Orthodox Church. (Perhaps Slavic chant developed under Western influences?) More investigation would be warranted.
Posted by papabear at 1:00 PM