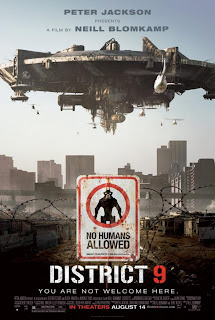 Friday afternoon I went to a free showing of District 9 for Youtube engineers and their guests.

When I first saw the teaser trailer, I thought the movie would be sedate and cerebral, despite the presence of aliens -- a mockumentary looking at the plight of aliens who have landed on earth but have been rejected by humans. Then I saw the theatrical trailer, and my expectations changed. It was obvious that the movie would involve some sort of role reversal, with a human finding himself on the side of the aliens and fighting other humans. It seemed like just another "sci-fi" action movie. The theatrical trailer was misleading, though, as to how much action there actually is in the movie.

The gore (and violence) content was much higher than I had expected, much of which was caused by aliens' weapons, whose effects were reminiscent of Half-Life or Halo, or some other sci-fi first-person shooter (Duke Nukem, Doom). Was this due to Peter Jackson's influence?

Did the Google/Youtube Geeks enjoy this? Was the movie a total geekfest? How many were actually repulsed by the violence? Did the majority revel in the onscreen violence?

I believe the CGI was done by WETA, and it was more than adequate.

The villains are primarily white [South African] males. (I don't think much Afrikaans is spoken in the movie -- the movie is in English, while the aliens make clicking noises.)

I must admit that I did like the mech/powered suit action. It makes a geek wish for a live-action Evangelion or Votoms movie. The hud for the power suit was comparable to the one for the Iron Man suit.

As for the plot holes or plot elements that remain unexplained--why did the aliens end up being stranded on earth? Why was there no fuel? Was Christopher Johnson one of the leaders of the worker drones? (Slave master?) Or one of the more intelligent drones? There was not enough fuel in the tanks to get the ship home, but enough could be recovered from various pieces of junk.

While the movie may be perfect for the geek crowd, I don't think I can recommend it because of the graphic violence.

The issues the movie raises:
On the surface it seems the major question is that of alien immigration, and whether it is just to keep them apart from human civilization. Was the movie originally intended as tool to get the audience to think about immigration and laws and rights, and what is just?

As I watched the movie, I thought there might be some sort of reversal of audience expectations and the humans discover that they are plotting something. An alien conspiracy to invade the Earth perhaps. A reversion to the typical sci-fi alien invasion movie. If the aliens are trying to invade us, then they would deserve to be isolated.

The aliens, who are called "prawns" by the humans because of their appearance, are seen as interlopers by some. Any sympathy in the masses for their plight seems to have been eroded with time and familiarity. Did the story give sufficient reasons for the humans to not segregate the aliens? A defense was given for their violent behavior -- they've been put into poor living conditions, they're frustrated and do not have anything to do. Their lashing out in violence is to be expected, it's a "natural" reaction.

But is there any indication of intelligence on the part of aliens that would enable them to be integrated into human society? The presence of language does seem to be an indication of intelligence. What about the sharing of natural resources? How could the labor of the aliens be applied? And do they have what is necessary to direct themselves? Or do the drones have to be ruled by another? Without direction by others, would the aliens be able to (re-)build some sort of civilization of their own, if they had access to resources? Is the planet big enough for humans to give the aliens some territory of their own? I do not think liberals would be comfortable with admitting that most of the aliens are suited for being tools of those who have the intelligence to rule them, whether they be alien or human.

Can a community chooses who it wants to accept into its community? Does it have to accept alien customs as its own? Is rejection based solely on appearance a sufficient justification? Or do we have to look at cultural differences as well? It's not just appearance that is the barrier, but the fact that they are not human, and only a few appear to be intelligent in the same way Vulcans or other humanoid species that are the stock of contemporary sci-fi are. Inter-species sex is hinted at, with the trafficking of human prostitutes to service the aliens. Did the audience find this revolting?

The aliens do not appear to respect human customs. Again, some might argue that they do not feel welcome and human hostility towards the aliens feeds alien resentment of the humans. But it seems to me that the majority of the aliens justify with their behavior their isolation. If we approve or at least not reject the solution adopted by the humans in the movie, it is because the movie makes the case that the aliens should be excluded from human communities not simply because they are different, but because they cannot live in harmony with humans. A concession to the modern sensibility, perhaps. What if the aliens were more like the Newcomers of Alien Nation? Would we be able to concede that humans who do not wish to live with them should not be forced to do so?