On this week's episodes of Three Brothers (수상한 삼형제) on KBS America: 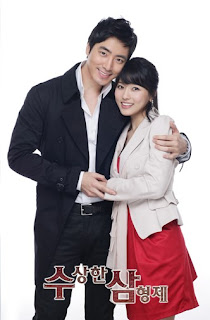 Isang finally married Eoyeong. However on the night of their honeymoon they had a major argument; Eoyeong insisted that Isang use contraception, because she wasn't ready to have a baby since they did not have a plan. (She also wanted to do other things with her life first, namely, to continue her studies and to help her father's jewelry company at a critical point in its growth.) Isang, on the other hand, thought that it was "natural" for married people to have a baby right away, and that very little planning was needed. Or, a wife and husband could plan once they conceived, and that they'd manage, just like their parents.

Is this really a model romance? Or are writers for the show just trying to show the audience how conflicts can arise so that the audience may avoid them? Or is the conflict just for the sake of drama? There are two sources of disharmony: (1) Eoyeong is older than Isang, and may not fully respect him as her husband. (As I mentioned in the last post, Isang is rather beta in his behavior. Do the writers approve of it?) (2) While Eoyeong believs that a mother should take care of her own children, she is nonetheless still desirous of her autonomy, rather than coordinating her actions with that of her husband, in such a way that does not violate the natural law. (Not that either character shows any awareness of contraception being wrong.) I am waiting to see how all of this is resolved.

Why didn't the couple discuss children (and other important matters) before getting married? The wedding was rather rushed, since they wanted to get it done with in order to relieve some of the tension that Isang's mother was causing. Isang blamed his youth and inexperience. Why didn't his parents give him the proper guidance in these matters? Or did they automatically assume that any prospective bride would be "traditional" and have children right away? The drama does show that even if everything "feels" right, this may not be the case, and important questions need to be discussed in order to determine compatibility; waiting to do so until after a man and woman get married may be too late.
Posted by papabear at 4:18 AM