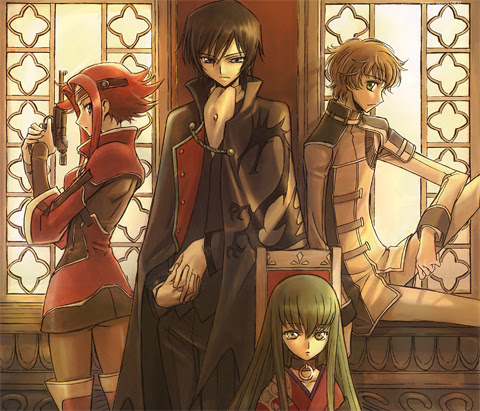 Heard anything about this series, Pete Takeshi? I believe its second season was one of the ratings competitor to Macross Frontier over in Japan. Better, or at least less cringeworthy than Le Chevalier D'Eon? That's what I first thought of when I saw some of the costumes. The character designs are a bit disturbing--even taller and thinner than the characters of Evangelion. (More elongated?) For that reason alone I don't think I would watch it. I'd rather have the shorter (and hence more real) characters of Rumiko Takahashi. Is the long, thin ideal of Japanese manga and anime artists (and also of fashion designers?) derived from self-esteem issues pertaining to height? I don't think these proportions match the classical Greek ideal or any ideal of beauty up to the 20th century.

Still, the alternative universe it presents is somewhat intriguing -- the rise of an empire governed by an 'aristocracy' using mecha? (How does it compare in that regards to The Five Star Stories?) Undoubtedly religion will have very little role to play in all of this. I don't find the mecha designs as attractive as the designs of FSS, or those of recent animated military sci-fi series that you would probably prefer over this.

I was at Kinokuniya today and I was browsing the current issue of Newtype. When will the pronouncement that the anime industry in Japan is dead after a long decline finally come true? Probably not until the demographic implosion reaches a critical point. Sky Crawlers I suppose will become at least a minor classic among fans, and Hayao Miyazaki has an international audience. But is anything new really being done? Miyazaki has something akin to Shinto spirituality in his work--is it an accurate generalization to say that religion is either neglected or put in a bad light in most manga/anime? Some version of secular humanism, especially in 'sci-fi' works, appears to be dominant in Japanese manga and anime for adult consumers. (Just one example: Ghost in the Shell.)

I don't know of any alternate-history novels in the United States take religion seriously. (Harry Turtledove doesn't? What do Southrons think of his potrayal of the Confederacy?)

I remember reading some of the Deryni novels by Katherine Kurtz when I was in junior high... I haven't read any since... Deryni Destination.

I'll admit that I wouldn't mind seeing more of Crest of the Stars. Hmm... according to the wiki entry Banner of the Stars III was done as an ova in Japan, and was released in 2005. I don't think it was released here. Tokyo Pop has put out a translation of the first arc. But there isn't really much out there that is of interest. Though I'll repeat it again--if Dune were to be animated by the Japanese, I think it would do well.

Crest of the Stars (TV) - Anime News Network
Posted by papabear at 9:09 PM

Cardcaptor on a cracker, the character designs were done by none other than CLAMP. If anything, the setup sounds closer to Escaflowne than FSS, and Escaflowne had enough problems that some of the creators had to get it out of their systems with Heat Guy J. (Which I don't understand why more people like.)

As for character designs, well, this is stuff intended for twelve year old boys. I wish that Oshii would just do another KERBEROS movie or something. (At least there's Sky Crawlers!) I think it's fair to say that the anime industry is running out of ideas -- always seems like the good stuff has been brought over decades ago, and now they're raiding the US for stories, e.g. Witchblade.