BAGHDAD, Iraq - U.S. forces on Tuesday recovered the bodies of two American soldiers reported captured by insurgents last week.
An Iraqi defense ministry official said the men were tortured and "killed in a barbaric way." Al-Qaida in Iraq claimed responsibility for killing the soldiers, and said the successor to terror leader Abu Musab al-Zarqawi had "slaughtered" them.

The claim was made in a Web statement that could not be authenticated. The language in the statement suggested the men were beheaded. U.S. Maj. Gen. William Caldwell said the remains were believed to be those of Pfc. Kristian Menchaca, 23, of Houston, and Pfc. Thomas L. Tucker, 25, of Madras, Ore.

He said U.S. troops — part of a search involving some 8,000
American and Iraqi forces — found the bodies late Monday near Youssifiyah, where they disappeared Friday.

Troops did not recover the bodies until Tuesday because they had to wait until daylight to cordon off the area for an ordnance team for fear it was booby-trapped, Caldwell said.

The checkpoint attacked Friday was in the Sunni Arab region known as the "Triangle of Death" because of frequent ambushes there of U.S. soldiers and Iraqi troops. Caldwell said troops encountered a lot of roadside bombs and other explosives during the three-day search, including in the area where the bodies were found.

The cause of death was "undeterminable at this point," and the two bodies will be taken back to the United States for DNA tests to confirm the identities, Caldwell said.

The director of the Iraqi defense ministry's operation room, Maj. Gen. Abdul-Aziz Mohammed, said the bodies showed signs of having been tortured. "With great regret, they were killed in a barbaric way," he said.

The claim of responsibility was made in the name of the Mujahedeen Shura Council, an umbrella organization of five insurgent groups led by al-Qaida in Iraq. The group posted an Internet statement Monday claiming it was holding the American soldiers captive.

"We give the good news ... to the Islamic nation that we have carried God's verdict by slaughtering the two captured crusaders," said the claim, which appeared on an Islamic militant Web site where insurgent groups regularly post statements and videos.

"With God Almighty's blessing, Abu Hamza al-Muhajer carried out
the verdict of the Islamic court" calling for the soldiers' slaying, the
statement said. The statement said the soldiers were "slaughtered,"
suggesting that al-Muhajer beheaded them. The Arabic word used in the statement, "nahr," is used for the slaughtering of sheep by cutting the throat and has been used in past statements to refer to beheadings.

The U.S. military has identified al-Muhajer as an Egyptian associate of al-Zarqawi also known as Abu Ayyub al-Masri.

The killings would be the first acts of violence attributed to al-Muhajer since he was named al-Qaida in Iraq's new leader in a June 12 Web message by the group. Al-Zarqawi was killed in a U.S. airstrike on
June 7.

Al-Zarqawi made al-Qaida in Iraq notorious for hostage beheadings and was believed to have killed two American captives himself —
Nicholas Berg in April 2004 and Eugene Armstrong in September 2004.

Caldwell said that Iraqi and American troops involved in the search for the missing soldiers killed three suspected insurgents and detained 34 in fighting that wounded seven U.S. servicemen.

Mansour Suleiman Mansour Khalifi al-Mashhadani, or Sheik Mansour, was killed with two foreign fighters in the same area where the soldiers' bodies were found, the U.S. spokesman said. The three were trying to flee in a vehicle.

Al-Mashhadani was "a key leader of Al Qaida in Iraq, with excellent
religious, military and leadership credentials" and tied to the senior
leadership, including al-Zarqawi and his alleged replacement, Caldwell said.

U.S. forces captured Mansour in July 2004 because of his ties to the
militant groups Ansar al-Islam and Ansar al-Sunna, but the military let him go because he was not deemed an important terror figure at the time.

A witness to the attack Friday told The Associated Press on Sunday that insurgents swarmed the checkpoint, killing the driver of a Humvee before taking two of his comrades captive.

Ahmed Khalaf Falah, a farmer, said three Humvees at the checkpoint came under fire from many directions. Two Humvees went after the
assailants but the third was ambushed.

He said seven masked gunmen, one carrying a heavy machine gun, killed the driver and took the two other U.S. soldiers captive. His account could not be verified independently.

Kidnappings of U.S. service members have been rare since the 2003 U.S.-led invasion of Iraq, despite the presence of about 130,000 forces.
The last U.S. soldier to be captured was Sgt. Keith M. Maupin of Batavia, Ohio, who was taken on April 9, 2004 after insurgents ambushed his fuel convoy. Two months later, a tape on Al-Jazeera purported to show a captive U.S. soldier shot, but the Army ruled it was inconclusive and remains listed as missing.

Caldwell said that in addition to the two soldiers, a dozen Americans — including Maupin and 11 private citizens — are missing in Iraq. In addition, Capt. Michael Speicher, a Navy pilot, remains listed as missing in Iraq since the 1991 Persian Gulf War, he said.
___
Associated Press writers Ryan Lenz in Balad,
Iraq, and Nadia Abou el-Magd in Cairo, Egypt, contributed to this report. 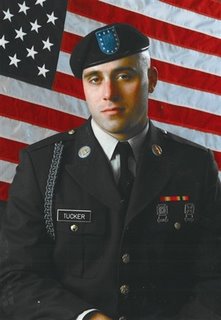 In this undated photo released by the U.S. Army, Pfc. Thomas Tucker is shown. A group that includes al-Qaida in Iraq claimed Monday, June 19, 2006, it had kidnapped Tucker and Army Pfc. Kristian Menchaca, who were reported missing Friday while manning a checkpoint. Iraqi Maj. Gen. Abdul-Aziz Mohammed, announced that the bodies of Menchaca, 23, of Houston, and Tucker, 25, of Madras, Ore., had been discovered on a street in Youssifiyah, just south of Baghdad. (AP Photo/U.S. Army)
Posted by papabear at 12:43 PM