Would that I had the sorrow for my sins matching my nostalgic longing and sadness.
Posted by papabear at 8:51 PM No comments:

Rhonda Vincent's Next Concert in California

Looks like there is going to be only one local performance next year, in Livermore at the Bankhead Theater on January 3 at 7:30 P.M. I'm not sure I'll be able to attend.

"MovNat: evolutionarily natural fitness" by Erwan LeCorre
Posted by papabear at 12:00 AM No comments:

Maybe those from rural areas, with a family history in farming and the like, would be welcome elsewhere, particularly in more "conservative" regions. But the typical dweller of the coastal areas? Who would want them to invade their state?
Posted by papabear at 4:57 PM No comments:

5 Things I Re-Learned at WAPF 2012 by STEVEN WRIGHT

The creator of this documentary, American Meat (which features Joel Salatin), was present at the conference:

Posted by papabear at 9:46 AM No comments:

What Every Woman Should Know About the Pill

The article does not deal with the morality of their use, but women should at least be aware of the possible negative consequences of using the pill to their health.

Recommended alternatives include withdrawal, but includes methods that are part of NFP.

Couple to Couple League
Posted by papabear at 9:41 AM No comments:

The New Evangelization and Ecumenism

Rome Reports: Pope: What's the role of ecumenism in the New Evangelization?

Posted by papabear at 9:31 AM No comments:

Five centuries of British music
Posted by papabear at 9:27 AM No comments:

Secession in the News

Nationalist (or Yankee) Catholics have been poo-pooing the petitions (ignorant of the problem of scale that affects their application of CST to the federal union). I don't see much point in engaging them. I think all their talk about reforming the Republican Party or the Federal Government (through some sort of movement or party politics) will come to naught. The petitions will be discussed tomorrow on Chronicles Unbound.

Vox Populi: Ron Paul on Secession
Statement by Dr. Michael Hill
Secession Petitions: Good PR But Bad Politics by Ron Holland
Is it time for the States to secede from the Union? - The Libertarian Republic

The Hobbit: An Unexpected Journey OST

Empire: Listen To The Complete Hobbit Soundtrack
Posted by papabear at 10:23 PM No comments:


Zenit: ON THE KNOWLEDGE OF GOD
"God Inspires and Accompanies our Efforts to Know Him and to Find Our Happiness in Him"
Posted by papabear at 7:47 AM No comments:

An Article on the Greek Orthodox Church and Golden Dawn

A good follow-up piece to this - Church of Greece split over role of neofascist Golden Dawn party.
Posted by papabear at 7:37 AM No comments:

The Archdruid's latest: Deterrence in an Age of Decline.


There are times, and this is one of them, when I wonder if somewhere in the last few weeks we all somehow got teleported into an alternate universe where nothing works quite the same way as were used to.  That feeling may be a bit easier to understand when I mention that I’ve just been praised on the air by Glenn Beck. Yes,that Glenn Beck. He was commenting on an interview I did not long ago with Chris Martenson on his Peak Prosperity podcast, which is not a thing I’d normally expect someone like Beck to find congenial.  Oh, and Beck noted in the same broadcast that of course there are hard limits on energy and resources.

Posted by papabear at 9:48 PM No comments:

A Lecture by Charles Murray

I missed this post at the Imaginative Conservative when it was published earlier this year: In Pursuit of Happiness and Good Government

In Pursuit of Happiness and Good Government
Synopsis

Review at The Freeman
Kirkus Reviews
Posted by papabear at 8:59 PM No comments:

Andrew Bacevich on the Republican Party

Dr. Bacevich suggests how the Republican Party can reform:


If the Republican Party wishes to represent a conservative perspective, it should advance a serious critique of American culture and then derive authentically conservative economic and foreign policies from that critique.

First, conservatives should claim the environmental movement as their own. Preserving the natural world should be a cause that all conservatives embrace with gusto. And, yes, that includes the issue of climate change.

Second, conservatives should lead the way in protecting the family from the hostile assault mounted by modernity. The principal threat to the family is not gay marriage. The principal threats are illegitimacy, divorce, and absent fathers. Making matters worse still is a consumer culture that destroys intimate relationships, persuading children that acquiring stuff holds the key to happiness and persuading parents that their job is to give children what the market has persuaded them to want.

Third, when it comes to economics, conservatives should lead the fight against the grotesque inequality that has become such a hallmark of present-day America.

Call me old fashioned, but I believe that having a parent at home holds one of the keys to nurturing young children and creating strong families. That becomes exceedingly difficult in an economy where both parents must work just to make ends meet.

Flattening the distribution of wealth and ensuring the widest possible the ownership of property can give more parents the choice of raising their own youngsters rather than farming the kids out to care providers. If you hear hints of the old Catholic notion of distributism there, you are correct.

Finally, when it comes to foreign and national security policies, conservatives should be in the forefront of those who advocate realism and modesty. Conservatives should abhor the claims of American dominion that have become such a staple of our politics. Saving humanity is God’s business, not America’s.


Does he realize that the Republican Party in its origins is not the "conservative" party but the party of the rich? Hence its early embrace of feminism? Illegitimacy, divorce, and absent fathers - the breakdown of patriarchy. Have the Christian ecclesial communities failed in capitulating to a divorce culture? Yes. Even if we agitate for changes to divorce laws and the like, can we succeed in the face of those who are content with the system as it is? Dr. Bacevich may refrain from advocating that women be homemakers and mothers to their children, but how many women will really be satisfied with a man who takes upon this role? I agree that having at least one parent home is necessary for family health, but feminism is opposed to this, and the Republican Party will not repudiate feminism -- just look at the examples of McCain and Romney.
Posted by papabear at 8:40 PM No comments:

Athenaeum
Ordo Praedicatorum
Posted by papabear at 6:35 PM No comments:


Kevin R. C. Gutzman, Ph.D. on "James Madison and the Making of America"

Posted by papabear at 6:03 PM No comments:

Posted by papabear at 4:42 PM No comments:

Michael Kumhoff on The Future of Oil, Geology vs. Technology

He is one of the authors of that IMF study - IMF study: Peak oil could do serious damage to the global economy

Posted by papabear at 4:42 PM No comments:

The Beginnings of Politics

Jack Donovan grasps the fundamentals of group identity and organization that some (especially advocates of CST) lack: The Bright Side of Illegal Immigration
Posted by papabear at 10:48 AM No comments:

A Present for the Holy Father

Rome Reports: Pope is surprised by Polyphonic Choir at the Vatican

A Monument to Blessed Columba Marmion

NLM: Monument to Blessed Columba Marmion by Duncan G. Stroik Unveiled in Rome
Posted by papabear at 10:27 AM No comments:

Book Review - True Reform: Liturgy and Ecclesiology in ‘Sacrosanctum Concilium’, Massimo Faggioli
Posted by papabear at 10:22 AM No comments:

Related:
Cities–too big to fail? by Mary Logan (EB)
Posted by papabear at 10:14 AM No comments:

Mind of the New Majority By MICHAEL BRENDAN DOUGHERTY
Pat Buchanan is more than a conservative—he’s Nixon meets Spengler. 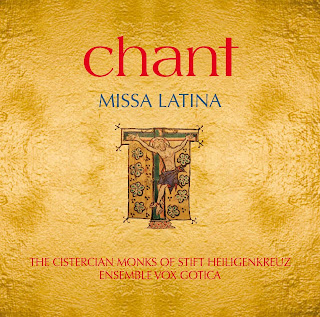 The CD is being advertised as a a way of commemorating the 50th anniversary of Vatican II. Ensemble Vox Gotica is also participating.

The announcement from the FB page for the monastery:

The last CD, Stabat Mater, was just released several months ago. I didn't know there was a special companion CD to "Chant" for Advent and Christmas.

Buy them here. (The "Missa Latina" CD has not been released yet.)
Posted by papabear at 2:32 PM No comments:

Again, the traditionalist viewpoint on the American political system.

Well, Southron Patriots would dispute what CF says about the Confederacy, at the very minimum.
Posted by papabear at 2:12 PM No comments:

Who's Left in Congress to Talk about Peak Oil?

Roscoe Bartlett was not re-elected...

A tribute to Roscoe Bartlett by Ray Long (EB)

Related:
Our dependence on oil puts a glass ceiling on economic recovery by Victoria Johnson
Posted by papabear at 2:05 PM No comments:

Read more »
Posted by papabear at 9:39 PM No comments:

“Differences with Roman Catholics should be overcome”
Posted by papabear at 1:48 PM No comments:

The Impending Demise of the Anglican Church?


"I will vote in favor of women bishops"

Posted by papabear at 1:47 PM No comments:

A reader at VFR asks about the political affiliations of East Asians.

East Asians and Southeast Asians are indoctrinated in public schools in leftist areas (the Left Coast). They have very little or no attachment or interest in traditional American culture and history. If they assimilate, they assimilate to becoming good Yankee consumers and liberals. Many of them came to the United States looking for a better life, defined primarily in terms of wealth and conveniences.

Many of the Vietnamese students cheered the election of Obama; they think he is cool, in comparison to Mitt Romney. Cool as defined by whom? The popular culture? The education establishment? (I heard this 4 years ago from students of every ethnic background, when Obama was first elected.) Similar, many of the Taiwanese-American students are also Obama supporters, even though Chinese and Taiwanese immigrants tend to be fiscally conservative.

It may be that many of them (the less affluent or those who are able to better hide their income from the IRS and the state) also support increases to the welfare state, in so far as they benefit from it, either honestly or dishonestly. (I know of many examples of the latter. Uhmerica is the land of freebies and gimmes, after all. Can't miss out on getting something for nothing.)

Posted by papabear at 1:31 PM No comments:

"A Lot of Gray Hairs Here."

And white hairs at last night's concert by RBA. Is the market for bluegrass and old time music so small in this part of the San Francisco Bay Area? While I was driving through Los Altos to the venue, I asked who currently occupied these houses. A lot of Asians; I think the percentage is almost as high as Cupertino. Do they care about bluegrass or old time music? Not really. Though there was one happy Asian fan at the concert, besides me. If she was with her son, she married someone white.

You'll see some young people in Felton or Berkeley at least... (and I'm not including myself.)

Posted by papabear at 1:16 PM No comments: