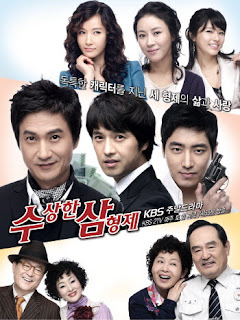 The KBS family drama Three Brothers (수상한 삼형제) makes me think of Dr. Fleming's piece, "Three Weddings and a Funeral."
Isang, the youngest son, is rather beta in his relationship with his gf/fiancée. His subordinate (Isang is a police captain) is dating the fiancée's sister, and is much more alpha in how he handles her. The mother of the Kim family is very bossy? Is she very traditional in her expectations of her daughters-in-law or in how she manages the household?

Isang's father was originally opposed to his son's marrying Eoyeong because her father, who had been a gangster in the past, had framed him for a crime which led to the father being put in prison for a while. After Isang was seriously injured in a police operation, his father yielded and consented to the marriage, even reconciling the Eoyeong's father. Isang's mother doesn't like Eoyeong because she's older (but acts rather immaturely for her age) and isn't as traditional as she would like. She remains opposed to the marriage.

I think Isang is too beta in his relationship with his girlfriend, but that's not a sufficient reason within the story of the drama to keep them apart. If we looked at it from a pagan point of view, as it is elaborated by Dr. Fleming in his piece, would we think that his parents' objections were sufficient for the marriage to not take place?

Eoyeong is played by Oh Ji Eun. She's quite cute; I think she has one of the typical Korean pretty woman looks.