I did not know he is patron of China. (Read about the "Canton Conference.") 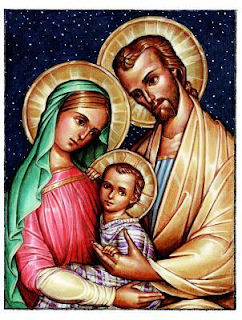 This image was shared by Leah Darrow - I don't know its origin. Why doesn't it produce the same psychological effect as an icon? Is the difference in perception due solely to familiarity? Is it too "cartoon-like" while icons are not? (The halos should be redone.)  I think parts of my reaction is caused by the background - if it were against the typical yellow or gold background, it would be slightly better. Too western? Their appearances seem more "European" - like Russian icons of the 19th century, but to an even greater degree?