The gisaeng, women who entertained guests at any feast or den of worldly pleasures with their songs, dances and other accomplishments, are emerging as the pop culture icon of 2006. It began as just a flicker at the end of last year, but now the stories of the gisaeng are turning up everywhere -- in movies, musicals, plays and comic books, just to name a few -- in a genre-spanning blaze. Every producer under the sun is trying to come up with their own spin on the gisaeng business.

At front and center of the hysteria is Hwang Jin-I, who is recognized as the queen of female entertainers during the Chosun era.

She was not just out there pouring drinks and selling her body, but was the epitome of the gisaeng ideal: competent in verse, calligraphy and painting. What’s more, she was an illegitimate child which kept her from reaching the top echelons of the strict social hierarchy of the era, and her fight against the classification has made her into a symbol of resistance. The passion that lies deep under the charm only known to the gisaeng and their defiant humanity must be part of the reason for the revival of interest. 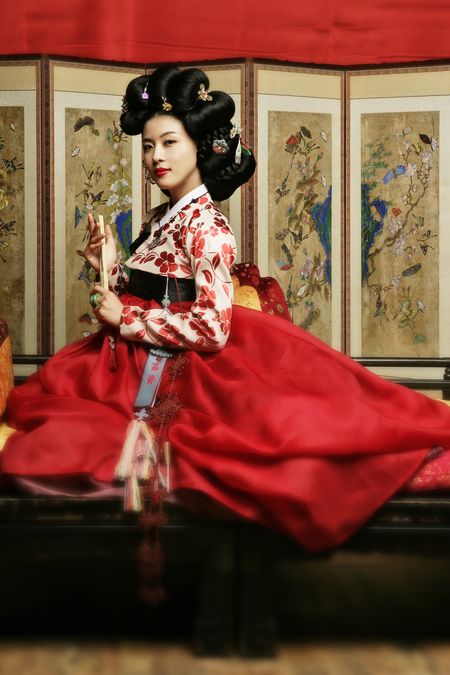 A poster for the TV drama ‘Hwang Jin-I.’

In the KBS 2TV history drama “Hwang Jin-I,” the gisaeng is on the airwaves. Another film is slated for early next year starring Song Hye-gyo and Yoo Ji-tae. On for one month starting Nov. 25 at the Universal Art Center, a similarly-themed musical will be presented.

Actor Heo Joon-ho is simultaneously producing the Haeohwa story, also about a gisaeng, as a TV drama and a musical. The three characters that make up the name Haeohwa -- “understanding,” “language” and “flower” -- sum up the gisaeng. The work follows the lives of four young women who enter a school for gisaeng called Yegiwon. Auditions for the show started on Monday, and Kim Hee-seon and Park Ji-yoon have already been cast.
The cover of the hit comic book ‘Story of a Gisaeng’ by Kim Dong-hwa.

The hit comic book “Story of a Gisaeng” by Kim Dong-hwa has been picked up by A-Com International and Showtic Communications and is in the process of being transformed into a TV drama and movie.

Experts agree that the entertainers are a novel topic and have a competitive edge.

“There is love and passion, with dancing and singing naturally woven in -- it’s just a charming subject matter,” Showtic Communications CEO Kim Jong-heon says. “This is the cutting edge of the history drama boom that takes another look at history.” He added foreigners will also be able to really enjoy these programs, “so it may become the new blue chip of the Korean Wave.”

Now that I think about it, I wonder if the Gisaeng craze has anything to do with the Geisha craze (sparked by Memoirs of a Geisha?)...
Posted by papabear at 9:01 PM