BILL MOYERS: And, yet, you say that the prime example of political dysfunction today is the Democratic Party in relation to Iraq.

ANDREW BACEVICH: Well, I may be a conservative, but I can assure you that, in November of 2006, I voted for every Democrat I could possibly come close to. And I did because the Democratic Party, speaking with one voice, at that time, said that, "Elect us. Give us power in the Congress, and we will end the Iraq War."

And the American people, at that point, adamantly tired of this war, gave power to the Democrats in Congress. And they absolutely, totally, completely failed to follow through on their commitment. Now, there was a lot of posturing. But, really, the record of the Democratic Congress over the past two years has been - one in which, substantively, all they have done is to appropriate the additional money that enables President Bush to continue that war.

BILL MOYERS: You say, and this is another one of my highlighted sentences, that "Anyone with a conscience sending soldiers back to Iraq or Afghanistan for multiple combat tours, while the rest of the country chills out, can hardly be seen as an acceptable arrangement. It is unfair. Unjust. And morally corrosive." And, yet, that's what we're doing.

ANDREW BACEVICH: Absolutely. And I think - I don't want to talk about my son here.

BILL MOYERS: You dedicate the book to your son.

ANDREW BACEVICH: Yeah. Well, my son was killed in Iraq. And I don't want to talk about that, because it's very personal. But it has long stuck in my craw, this posturing of supporting the troops. I don't want to insult people.

There are many people who say they support the troops, and they really mean it. But when it comes, really, down to understanding what does it mean to support the troops? It needs to mean more than putting a sticker on the back of your car.

I don't think we actually support the troops. We the people. What we the people do is we contract out the business of national security to approximately 0.5 percent of the population. About a million and a half people that are on active duty.

And then we really turn away. We don't want to look when they go back for two or three or four or five combat tours. That's not supporting the troops. That's an abdication of civic responsibility. And I do think it - there's something fundamentally immoral about that.

Where is the country?

BILL MOYERS: Are you calling for a reinstatement of the draft?

ANDREW BACEVICH: I'm not calling for a reinstatement of the draft because I understand that, politically, that's an impossibility. And, to tell you the truth, we don't need to have an army of six or eight or ten million people. But we do need to have the country engaged in what its soldiers are doing. In some way that has meaning. And that simply doesn't exist today.

Introduction to the book.Macmillan: The Limits of Power: The End of American Exceptionalism
Dr. Bacevich's faculty page

Center for a New American Security

Nancy Bacevich, center front, mother of fallen U.S. Army First Lt. Andrew Bacevich, is escorted to his grave site by U.S. Army General William Wallace, front right, as Bacevich's father Andrew Bacevich, second from right, follows while holding a flower at the Rural Cemetery, in Walpole, Mass., Monday, May 21, 2007. Bacevich was killed May 13, 2007, when an improvised device exploded while he was on a combat patrol in the Salah Ad Din Province, in Iraq.

A somber service in Norwood for a fallen soldier 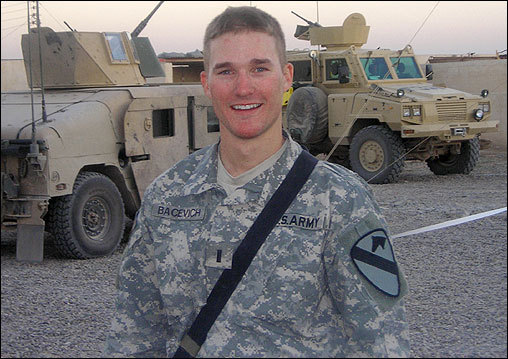 (source)
Requiescat in pace.
Posted by papabear at 3:49 PM

BOTH CANDIDATES, AS WELL AS CONGRESS, MIGHT DO WELL TO LISTEN TO ANDREW BACEVICH… NOT JUST HEAR HIM

Only rarely does someone surface with qualifications as well as insights and a delivery that stimulate thinking. Even more rarely does an individual stimulate the very personal mental articulation of self observation.

Bacevich deserves as broad an audience as can be exposed to his thoughtful analysis.