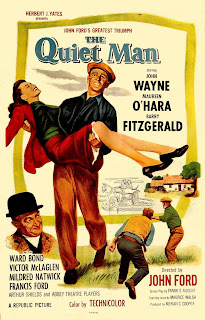 In a discussion about the movie Brave, I added: "I am reminded of the feisty redhead in The Quiet Man, played by Maureen O'Hara, who finds satisfaction being put in her place by John Wayne. No one's going to make that kind of movie now." In fact, if the movie were to be updated, she'd probably be like the heroine of Brave - independent and submitting to no man. John Wayne's character would still be the rich American visiting the homeland, but he would be impressed by how much of a strong woman she is, perhaps even being bested by her in the boxing ring! Much like a modern-day Boudica, she'd be a raging Celtic warrior seeking unconditional surrender. (But would she still respect him after beating him?) She'd probably also fight her brother in court for the inheritance, and he'd be disowned, much like the patriachy that he represents, for somehow unjustly taking away what belongs to her and oppressing her.
Posted by papabear at 4:10 PM