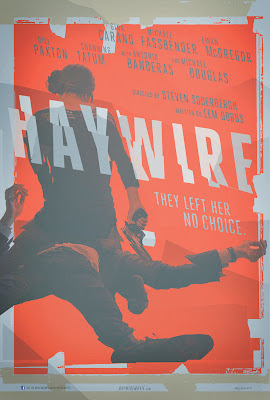 The movie's soundtrack has a 70s feel and the movie is rather artsy in its visual feel. This isn't a surprise since the director is Steven Soderbergh. As an action movie is it better than, say, the Bourne series? A movie fan can be grateful that the action sequences are not shot with a shaky cam. They may show off her MMA skills but nonetheless lack realism since she manages to kick every male ass in the movie. The viewer can tolerate her wooden acting since her role does not demand much of her. (Though she is able to act like an Uhmerican woman when she is undercover with Michael Fassbender.) But the girl power exhibited by the movie is just overwhelming, as she is trying to be more of a man than her male co-stars. Can we blame James Cameron's Vasquez in Aliens? At least Vasquez showed her vulnerable side towards her end. The movie would have been much more enjoyable if her character had been a man. While the technical aspects of filming the action sequences should be an example to other directors, the perpetuating of girl power theme needs to end.

Related:
One female marine tells part of the truth about women in the military:  A Few Good Women
Posted by papabear at 4:42 PM