Taiwanese Star in Korea to Promote New Gangster Film
Taiwanese actress Shu Qi (30) is in the country to promote the Dec. 28 release of her new film “My Wife Is a Gangster 3.” She is the sole lead in the third installment of the series, which made it to the top of the box office in Hong Kong as well as Korea. The actress reported the Korean Wave is still being felt in Hong Kong, adding it was an honor to be cast as the lead in her first appearance in a Korean film. 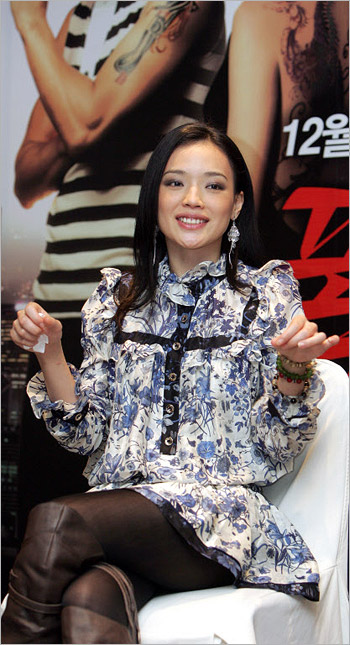 Shu Qi became known in Korea for her work in “City of Glass” (1998) with Leon Lai and her role in the Hou Hsiao-hsien film “Three Times” (2005). In 1996 she appeared alongside Leslie Cheung in “Viva Erotica” in a role that won her Best New Performer and Best Supporting Actress at the 16th Annual Hong Kong Film Awards. In “My Wife is a Gangster 3” she plays the heir to an organized crime empire in Hong Kong that has been forced to temporarily flee to Korea following a power struggle back home. Opposite her in the film is Lee Beom-soo, who steps forward as her protector not knowing her identity and himself is a “No 3” in a domestic organized crime syndicate.

Even though it was hard communicating with her fellow actor, it wasn’t all that critical, she says. Lee was “like a big brother,” she said, and whenever they were not shooting he would seek her out to go and eat together. When it was cold he would offer her some of his clothing. Asked if being put up for comparison with actress Shin Eun-kyung, who formerly played the role, was a burden, she said, “To say that I didn’t ever think about it would be a lie.” The two stars both have shown their tough sides, like when they battle 50 men with a sword in each hand, but their style in love is a little different. “While Shin Eun-kyung loves in a tough way, like a gangster, I show both softness and toughness at the same time,” Shu said.

She has been told thousands of times that she is sexy, and it is hard to tell which character is closer to real her: the sexy woman from “Viva Erotica” or the pure and innocent girl in sporty clothes from “City of Glass.” “In reality, I’m so conservative that I even feel embarrassed when I see other actresses wearing sexy clothes on TV.” When someone reminded her that she has been in the business for 10 years and has been in more than 150 films, she looked surprised and her eyes widened. Time has flown, and she did not even know how she had already shot so many, she admitted.

Already Shu has appeared in four films this year. “From now on, I want to take my time selecting films,” she promises.

Uh... yuck. She may not be as bad as certain American celebrities... but... she isn't free from scandal. I find her characters to be annoying usually. Can she pull off being a tough gangster? I suppose she played tough in Too Close, but it's called acting for a reason. Just another facet of the Asian entertainment industry's obsession with heroines who can kick @$$, even if the actresses lack the physique and strength to do it in real life.

“In reality, I’m so conservative that I even feel embarrassed when I see other actresses wearing sexy clothes on TV.”

Wow. Given the movies that she's done and other things, this seems to be just a lie. Maybe she said it for the benefit of Korean society.

It is unfortunate that My Wife is a Gangster 2 was so bad--I like Shin Eun-kyung, and it's understandable that she would not want to do the role again.