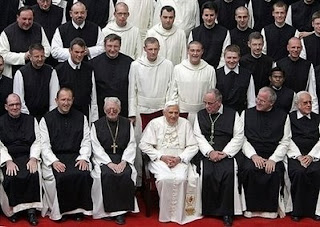 Pope Benedict XVI takes a group photo with Cistercian monks in Heiligenkreuz monastery in Heiligenkreuz, Lower Austria in 2007. The monks from a 12th century monastery just outside Vienna have secured a lucrative recording contract with Universal Music, the label for pop stars such as Amy Winehouse and Eminem, a record executive said Wednesday.

post on the abbey and cd; more photos of the Holy Father's visit last year at the official website for the abbey
Posted by papabear at 11:11 PM