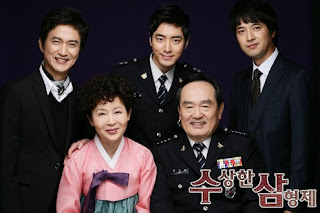 Last week's episodes of Three Brothers on KBS America featured a Lunar New Year religious ceremony/sacrifice for the ancestors. Eoyeong told Isang that she had to stay with her father to perform the ceremony, since her family had no sons and she was the oldest. Isang decided to stay with her until the ceremony was performed, and then they went over to his parents'. This might seem to be a reasonable compromise for a tough situation, but rules in a patriarchal society exist in order to delimit and apportion duties. Why couldn't Eoyeong's father have waited for them to return? Probably because Isang and Eoyeong would have to remain at his parents' for much of the rest of the day. Still -- what is the traditional Korean understanding of the wife's relationship to the husband? Is it like the traditional Chinese one, in which the wife, upon marrying, is no longer a member of her family but is now a part of her husband's?

The family may survive despite all of the aberrations. (The oldest son is married to a single mother. The second is tempted to stray with a high school friend who works for him.) But at what cost? A scriptwriter can very much push an agenda through the moral of a story and the manipulation of emotion. Will the family, especially the mother, be able to reconcile itself to modern Korea, with all of its recent social developments? Will the customs of the past be discarded as being irrelevant to the times? I have read that these days, more and more sons are moving in with the family of the daughter-in-law. What explains this trend?

It does highlight though the dilemmas that exist in strict Confucian societies. If the wife is the oldest in her family and there are no sons, who will care for her parents when they get old? If she is married to a man who is not the oldest son in the family, it seems humane for them to care for her parents. But should this be established as a norm? Or only permitted as a concession to circumstances? Maybe the traditional customs are more flexible than I think they are, but if the reaction of the mother to what is going on is any indication, they are still rather "rigid."

The Value and Meaning of the Korean Family
Family- Korean Language Practice
Posted by papabear at 1:37 PM

"Is it like the traditional Chinese one, in which the wife, upon marrying, is no longer a member of her family but is now a part of her husband's?"

Another anecdote: I meat with some older Korean gentlemen at my parish before a major holiday. I told them that I was going to visit my in-laws.

Half in jest, they said, "We Korean men didn't use to have to visit our wives' families, but thanks to you Americans, we have to now."

Thanks for the info! How much of an inroad has feminism made into South Korean culture?