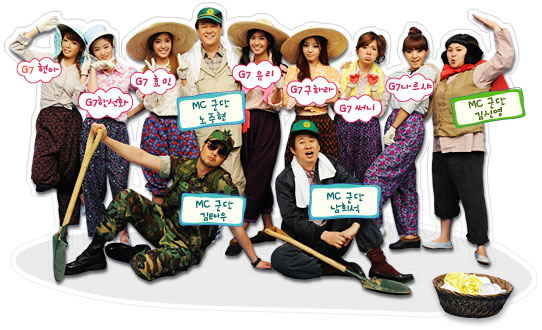 Ever since I've started watching it with English subtitles a few months ago, one of my favorite shows has been Invincible Youth (청춘불패), I've enjoyed watching as some members of various Korean girl groups try their hand at farming. I don't think the show will entice younger Koreans to take up farming, but it's a start. The farming they engage in is mostly labor-intensive, though their mentors do use machines from time to time, so it can't be said to be sustainable. I don't know what is used for fertilizer, but I think the produce will be consumed locally? Unless their farm really becomes a tourist attraction. The other cause of entertainment is how the the women behave and interact with one another and with the hosts of the show. While a view should be suspicious of reality shows -- many of these singers have an image based on being young and cute, I do think they are, for the most part, acting like themselves. And so they seem to be rather immature, even the older membes, like Juhyeon of After School  (who is 26) and Narsha of Brown Eyed Girls (who is 30!). Many of them do give the impression of being rather naive, despite having a "sexy" image.

Now if only someone could translate the previous episodes that I've missed for me...