Surprising Comeback of a Reserved Star

The first prejudice people have against actress Ko So-young is that she is a trend-surfer. The second is that she is a snob who will marry into the owner family of one of Korea’s big conglomerates. She shrugs off the first, declaring herself “oblivious” to trends. But the other charge clearly rankles. “I just can’t cope with that. I want a man who is ordinary and takes good care of his family, and who stays faithful to me his whole life,” she says. 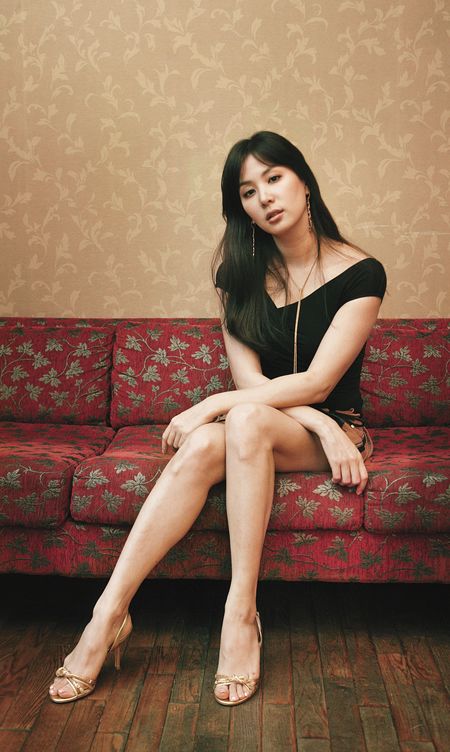 Back after a hiatus since her 2002 movie “Double Agent,” Ko is promoting the new horror movie “Apartment,” due out on July 6. The Chosun Ilbo caught up with her at a café in Seoul’s not un-trendy Cheongdam-dong this week. “I wanted to play in a genre movie,” Ko explains. She plays Sejin, who tries to solve the mystery of serial killings incidents, in the movie based on a comic book by Kang Pool.

Ko says she is like a character in a romantic comedy, not the melodrama she has often been cast in. Thus she stayed up all night with her friends cheering Team Korea in the World Cup, jumping all around her home with little devil horns on their heads. “I couldn’t see the game against Switzerland. I waited for the game till 2 in the morning but fell asleep and missed it. We probably lost because I wasn’t watching.” She claims she accurately forecast the outcome of the matches against Togo and France.

Ko So-young seems prone to loneliness and prickly like a rose who want to protect herself, but she does not allow herself to be downcast. She has never thought seriously about death, she says, and had over the past four years “did nothing and just had some fun.” She is most comfortable around people she has known for a long time, goes to the same places she likes and maintains the same hairstyle for years -- sticking to her own style “to the degree I can cope with.” The Internet? “I rarely do it. I still get news from papers, not online. I prefer Polaroid pictures to digital cameras.” No early adopter, Ko may be aloof, but what is mistaken for arrogance is just confidence and composure.