Review of The Unbearable Lightness of Dating 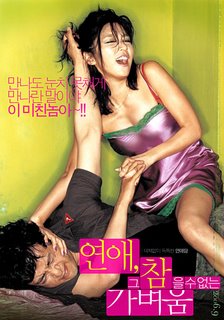 See this post for information about the movie. Official site. Korean Movie Database.

Kim Seung-woo plays Young-woon, Jang Jin-young plays Yoon-ah, who is a hyper-sassy girl and works as a hostess.

The amount of verbal abuse and physical violence (wrestling and slapping) that occurs between these two is rather perplexing, although perhaps it is meant to be a sign that all is not well. There is another scene which is rather offensive though not explicit, in which she sexually gratifies him while he is drunk.

All of the males shown are losers to one degree or another; Young-woon is weak and indecisive and bossed around by his mom, and of course there is the fact that he is carrying on relationships with two women at the same time. He is engaged to another woman, whom he eventually marries at the instigation of his mother. He doesn't completely use Youn-ah (even if it seems like she is more a sex toy than a partner) as he does care about her well-being to a degree. The problem is that he does not have a true moral quandary--he is reponsible for getting himself in the situation in the first place, through his wrong choices.

Why does the movie play up such unconventional characters? Is it because they are seen as fresh, and make for an unconventional love story? What is the justification for the movie? Such poor relationships seem to be the norm, at least here in the U.S., where love, marriage, and procreation have been severed from one another, and I suspect that such occurrences are on the rise in South Korea as well. Yoon-ah's love for Young-woon is a stupid love, and the relationship works mostly to her detriment. Love is not just about feelings, and the use of reason is necessary not only so that one loves others rightly, but so that one loves one's self rightly as well.

A posible weakness of the movie: it is not clear why she fell in love with him in the first place. What was the reason behind the attraction? Was she looking for someone "normal," someone who seems like a nice guy? But he's not--he has a lot of issues. Not only that but he is physically abusive--hitting his mentally handicapped brother and towards the end, after Youn-ah tells his wife about her relationship with Young-woon, he goes to her apartment and beats her up. Does this make for a psychologically plausible character? If it does, should we blame this use of violence on the society/culture? Can someone truly care about someone else and yet abuse them. In our culture, our first response is to say no.

Now I wonder if I should have not made it possible for others to watch the movie. I suppose I should screen Korean movies before downloading them and sending copies to others. Obviously the movie is supposed to be some sort of tragedy; the question is whether people will draw the right conclusions from it or not.

While I think the movie can be understood as validating traditional morality, is this what the film makers intended?
Posted by papabear at 6:19 PM