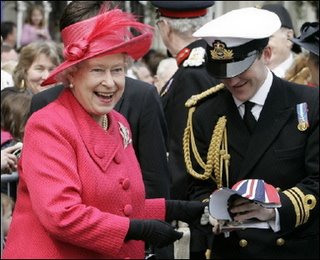 Queen Elizabeth II (L) laughs as she passes a gift of a Union Jack baseball cap to an aide during a walkabout to celebrate her 80th birthday in Windsor, England, April 21. In yet a further homage for her 80th birthday, Queen Elizabeth II has been hailed for imparting a "sense of calmness, serenity and stillness" to Britons buffeted by a turbulent world.(AFP/Pool/Kirsty Wigglesworth) 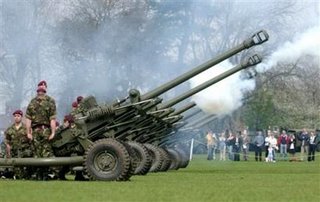 In this image made available in London by the British Army, Thursday April 21, 2006, six 105mm Light Guns from the airborne Royal Horse Artillery, fire a 21 gun salute at Abbey Field in Colchester, England, to honour Queen Elizabeth II's 80th birthday. It was the first time a royal salute had been fired at Colchester.(AP Photo/Chris Fletcher, Army ho) 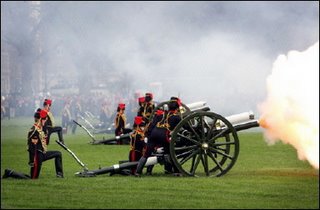 Gunteams from the The Kings Troop of the Royal artillery fire a twenty-one gun salute in London's Hyde Park in honour of Her Royal Highness Queen Elizabeth II's 80th birthday. Shouts of "Happy Birthday!" rang round the royal town of Windsor as the Queen smiled and thanked thousands of well-wishers who gathered to celebrate her 80th.(AFP/Odd Andersen) 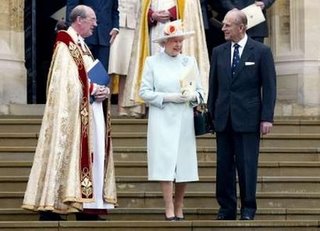 Britain's Queen Elizabeth II stands on the steps of St George's Chapel with The Right Reverend David Connor (L) and Prince Philip following a service of celebration in honour of her 80th birthday in Windsor, south England, April 23, 2006. The Queen was praised for her 'calmness, serenity and stillness' at a special service of thanksgiving on Sunday to mark her 80th birthday. REUTERS/Leon Neal 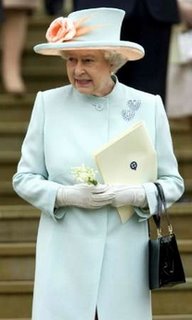 Britain's Queen Elizabeth II leaves St George's Chapel in Windsor following a service of celebration in honour of her 80th birthday April 23, 2006. The Queen was praised for her 'calmness, serenity and stillness' at a special service of thanksgiving on Sunday to mark her 80th birthday. REUTERS/Leon Neal 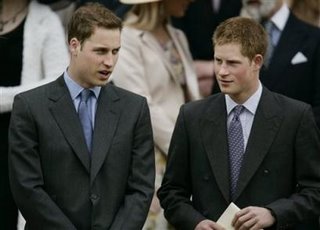 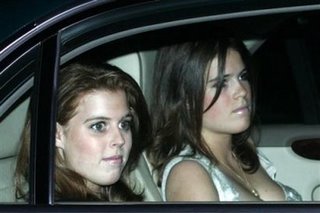 (Something for the New Scot.) Britain's Princess Beatrice, left, and Princess Eugenie arrive at Kew Palace in west London, Friday April 21, 2006, to celebrate Queen Elizabeth's 80th birthday. Prince Charles, the heir to his mother's throne, was to host a dinner Friday night for the queen at Kew Palace in suburban London. The guest list was small and exclusive, two dozen very close family member, and a 10-minute firework display was planned before the meal. (AP Photo/Sang Tan, Pool) 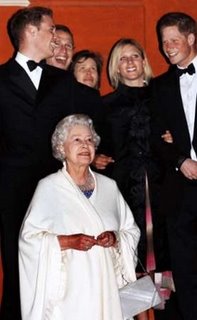