Peter Simpson and the Politics of Aristotle 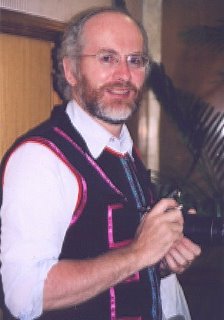 I had a chance to see him when he came to BC for a special conference, "Truth, Life and Solidarity: Philosophical Perspectives On The Thought Of Pope John Paul II" (24-25 February 2006). I asked him to sign a copy of his A Philosophical Commentary on the Politics of Aristotle, which is one of the better commentaries I've seen on the Politics, fitting well within the scholastic tradition. He has a new book which examines the Constitution of the United States from an Aristotelian point of view; it should be published soon. (I haven't found an expected date of publication yet.) Prof. Simpson also wrote a book on the philosophy of Karol Wojtyla, Pope John Paul II, On Karol Wojyla (Wadsworth Philosophers Series, Wadsworth, 2001).

While the Economics may not be an authentic work of Aristotle (although I'm inclined to think that it is at least Aristotelian in spirit), the Politics is. It is unfortunate that the text we have is incomplete (and that we do not have all of the constitutions that he collected). It is also unfortunate the St. Thomas did not finish his commentary on this text. Peter of Auvergne did, but I have not read it yet, and Peter of Auvergne's commentary (and questions on the Politics) are available only in Latin. (I wish my Latin skills were good enough that I could translate these quickly, and I also wish someone would pay me for it so I could publish it. I imagine Christoph Flüeler's Rezeption und Interpretation der Aristotelischen Politica im späten Mittelalter, 2 vols., is rather expensive.)

Professor Simpson presents his arguments for how the boooks of the Politics should actually be arranged in his commentary, and I think they are rather convincing. Hence, his commentary follows this order, rather than the received order that is still dominant.

Although I do have a keen interest in monarchies (there is an aura surrounding the throne and most royal families; there is also the desire to be a tyrant that can come out in fantasies), at the present moment I am more of an Aristotelian in my political views than anything else. While St. Thomas's mixed regime might have features of all three types of government, I wonder what he would have endorsed monarchy as THE ideal form of government or if he would have followed Aristotle in supporting both monarchy and aristocracy. Aristotle argues that if there is more than one virtuous person, and no one person surpasses the rest in virtue, it would be unjust to deprive any of them of a share in rule. Very few write from an Aristotelian point of view in commenting on current events and issues; many have articles in Chronicles magazine.

Because of Prof. Esolen's article on Sir Philip Sidney and Arcadia, I would like to get a copy of that to read; there are also the writings of St. Thomas More that I have not yet explored, along with John Althusius' Politica. More on medieval, Renaissance, and modern political theory as I progress.

Professor Simpson has his own personal website. A list of his publications. Read about his adventures in China. His faculty website at CUNY. (Which appears to be dead at the moment--I hope this is not permanent.)

John Haldane was also present at the conference. I'll have to devote separate posts to him and to analytical Thomism.
Posted by papabear at 9:00 AM

Well, I am not sure that the political leaders of my country are virtuous people. I don't think the last one was. The current one might be, although recently he did not give the parents of dead soldiers their due. The last leader probably wasn't; his party was riddled with vice. However, the head of state, Queen Elizabeth II, is definitely a virtuous woman--just, temperate, courageous and prudent. She never does anything shabby (that I know of), and she is gracious and hard-working, even at the age of 80.