Some of the scenes of the cities after the incident remind me of Life After People or World Without Us.

Naturally, one of the main characters is a female teenager who shoots a crossbow. (Hunger Games?) When she opens her mouth she sounds like the typical whining American girl. Emasculated Uhmerican males or those who enjoy watching strong chicks may enjoy consuming this mass media product. How many normal males will tune in though? Jericho seems much better, in comparison. There are may be strong strong male characters, but none are the moral center of the show, as far as I can tell. (True Grit?)  I think the show will not make it to a second season. Let NBC fail.

The show's producers might have done the country a favor by looking to Kunstler's World Made by Hand series for inspiration. Although he is aware of the loss of male identity, Kunstler may actually agree with radical egalitarianism. But he is probably more realistic about "gender roles" in a world without cheap energy, and these differences aren't necessarily due wholly to oppression arising due to inequality in physical strength.  For that sort of realism he would be derided by feminists as being sexist. For a world without electricity, everyone looks rather clean, especially the girl.


A World Without People 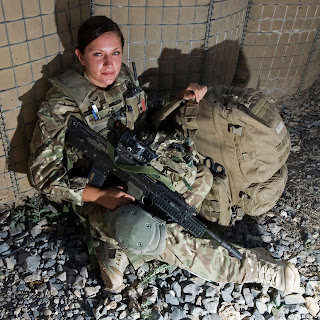 "Female Army medic in Helmand with the Guards: A young female combat medic is aiding the Queen's Company, The Grenadier Guards on their tour of the Green Zone of Helmand, Afghanistan. Private Abbie Martin, from Suffolk, has the combat medical skills to give the troops the life-saving aid needed out on the ground. "I carry drips, bandages, different types of body splints, tourniquets to stop the harder bleeds, all the kit that’s needed to help the guys who are really bad - as well as four days' worth of rations and water for myself. There isn’t much space for personal kit; medical kit comes first."


Sarge would probably have something to say about female medics if he were around. The combox is full of chatter by cheerleaders, happy about their brave new world. What would they know about what military life and military effectiveness have become since women were integrated into the military? You can bet that this medic isn't roughing it in the wilderness for long periods of time.
Posted by papabear at 6:21 PM