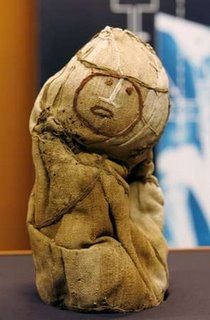 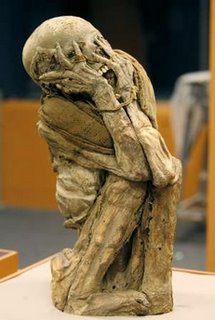 I don't know if someone's body should be put on display, but mummies are shown in museums everywhere... there is a mummy of a baby in this exhibition as well, but I decided not to post it.

LIMA (Reuters) - An unusual archeological site discovered in Peru's mountains may hold clues to the history of the Chachapoya people, known as "cloud warriors," who fought the Inca Empire before the Spanish conquest.

Keith Muscutt, a British-born Chachapoya researcher with the University of California Santa Cruz, said on Wednesday the site was "strikingly anomalous" because of its size, shape and remote location in the dense forest full of spider monkeys and toucans.

The unfortified, possibly ceremonial structure is located in an area previously considered on the periphery of the Chachapoya domain in the upper Amazon region.

"What it is showing is that we don't really know what their territory was," he told Reuters. The place where the ruins were discovered had been considered a buffer zone between the highland Chachapoya and the tribal cultures of the Amazon basin.

"It is certainly not a fortress, so either the Chachapoya's territory extended further East, or they relied more on cooperation than conflict with their neighbors," he said.

The Chachapoya civilization, which flourished between 800 and 1475, is known for its mountaintop citadels like Kuelpa and Vira Vira and well-preserved mummies found in tombs at the Lake of the Condors. Conquered by the Incas just before the Spanish conquest, they allied with the Spaniards after 1532, but fell victim to diseases brought from Europe and vanished.

This ruin, dubbed Huaca la Penitenciaria (Penitentiary Ruin), consists of a large ceremonial platform, a plaza and a number of rectangular and circular buildings.

The heavily overgrown site was discovered by the Anazco family of Peruvian explorers at a plateau in the mountains between the Rio Verde and Rio Huabayacu in the Department of San Martin, about 560 miles north of Lima.

In August, Muscutt, 60, took part in an Anazco-led expedition that made a preliminary survey of the site.

"My goal at this point is to notify the appropriate Peruvian authorities," Muscutt said. He is also talking to archeologists to evaluate the find.

Although additional research is needed to confirm that it is a Chachapoya structure, Muscutt said it had an ornamental frieze and dry masonry very typical of the Chachapoyas.

"Also, all the walls have a slight bulge to them like the side of a barrel, which I think is a fault in their engineering that they adopted and made a feature -- an aesthetic choice resulted from engineering accident," Muscutt said.

The site had been abandoned for at least 400 years. "It is a very interesting archeological time capsule," he said.