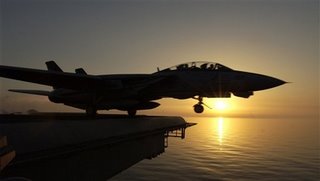 An F-14A Tomcat is launched from the flight deck of the aircraft carrier USS Kitty Hawk as the sun sets in the Persian Gulf during the Gulf War, Tuesday, March 18, 2003. The aging, Cold War-era fighter jet with moveable, swept-back wings that was glamorized in the 1986 Tom Cruise movie 'Top Gun' is being replaced with the newer F/A-18 Super Hornet attack fighter. The F-14 originally was intended to defend U.S. aircraft carriers from Soviet bombers carrying long-range cruise missiles. Built by what was then Grumman Aircraft Corp., the F-14 joined the Navy fleet in 1972. (AP Photo/Steve Helber)

VIRGINIA BEACH, Va. - The F-14 Tomcat, the dogfighting Cold War fighter jet immortalized in the movie "Top Gun," made its ceremonial final flight Friday in a display that suggested the timing was right for retirement.

Pilot Lt. Cmdr. David Faehnle and radar intercept officer Lt. Cmdr. Robert Gentry gave a final salute from inside their cockpit before aircraft no. 102 taxied down the runway and out of sight at Oceana Naval Air Station.

The plane that actually took off as thousands applauded and whistled, however, was aircraft no. 107, with Lt. Cmdr. Chris Richard at the controls and intercept officer Lt. Mike Petronis in the back seat.

The first jet had mechanical problems — "a common occurrence with the F-14," said Mike Maus, a Navy spokesman. The second jet had been on standby just in case.

Before the flight, Adm. John Nathman, commander of U.S. Fleet Forces Command and a former F-14 pilot, said the retiring jet with the moveable, swept-back wings was "sometimes tough to fly" and tough to fix — but it was resilient.

"The legacy of this aircraft is not the 'Top Gun' movie," Nathman said. "The legacy is found in America's commitment to win the Cold War."

Built by what was then Grumman Aircraft Corp., the F-14 joined the Navy fleet in 1972 and originally was intended to defend U.S. aircraft carriers from Soviet bombers carrying long-range cruise missiles.

Its dogfighting capabilities were glamorized in the 1986 film "Top Gun," starring Tom Cruise, but the need for such aerial feats dropped steeply when the Soviet Union collapsed in 1991.

The Navy retooled the F-14 as a ground-attack jet, and it dropped bombs over Bosnia and
Kosovo in the late 1990s, and helped support ground troops in
Iraq as recently as this year.

The jet's replacement is the F/A-18 Super Hornet attack fighter. The Navy's last 22 F-14 aircraft deployed came home to Oceana in March, but one squadron continued to flying the jets until this month.

Gentry likened retiring the Tomcat to "losing a member of the family."

"It's a bittersweet moment to look and realize that pretty soon you won't be flying that aircraft," he said. "There are few aircraft that elicit such a strong bond between the air crew and the maintainers and the people who build them."

About 3,000 guests — mainly former aviators, mechanics, suppliers and builders — were on hand for the jet's official retirement. The last flying F-14s will go to museums such as the Virginia Aviation Museum in Richmond, which received one last week.

Mike Boehme, the museum's executive director, expects the F-14 to be a big draw. "There's a certain mystique about it," he said.

It's a terrible shame that the F-14 is going out of service. Not sure if they're being kept around for aggressor training squadrons (the F-14 has stood in for the Su-27 as well as the Iranian F-14A in desert camo;the 414 CTS is as far as I know nothing but F-16s now)

Would have been nice to see the Super Tomcat 21 program go through. (a prototype is on display at the USS Intrepid in NYC) With fly by wire most of the handling difficulties would have been solidly addressed. On the other hand, I can't get around the fact that it has 50% more parts than the F/A-18C, so it spends more time on the ground.