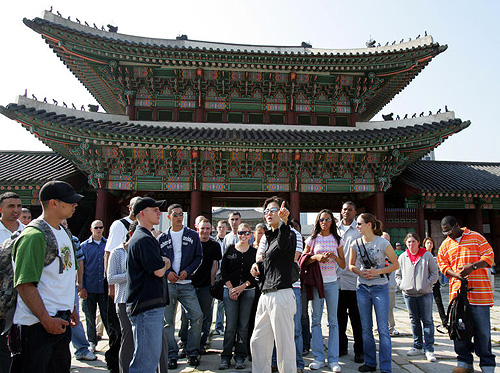 Some 70 new U.S. Forces Korea soldiers take a look around the Gyeongbok Palace in Seoul on Thursday morning. The event has been organized by the Defense Ministry since 1972 and some 14,000 USFK soldiers have taken part in it so far./Yonhap 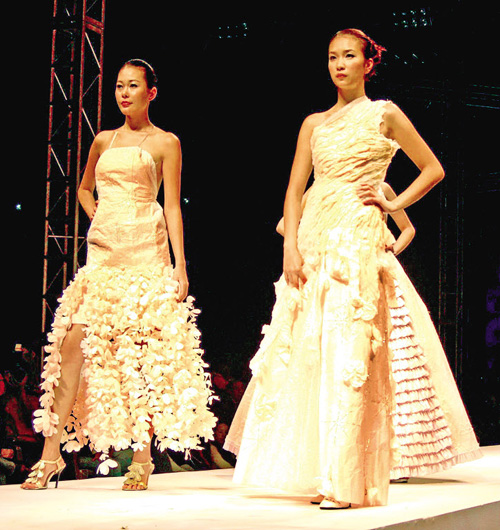 Models in wedding dresses made of Korean paper walk the catwalk at the eighth cultural festival for Korean paper in Wonju, Gangwon Province, on Wednesday. 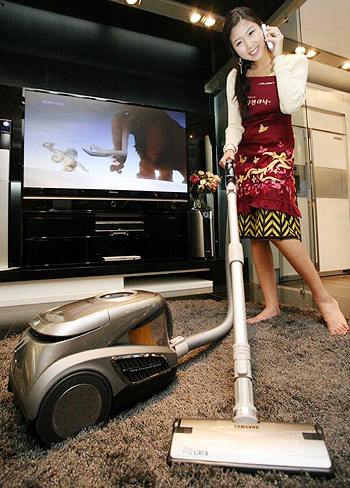 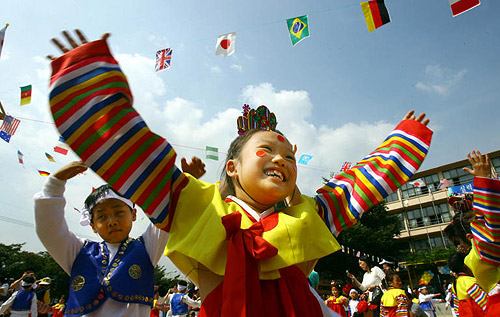 First grade students in traditional costume dance during an athletic meeting at Bokwang Elementary School in Seoul on Thursday./Yonhap 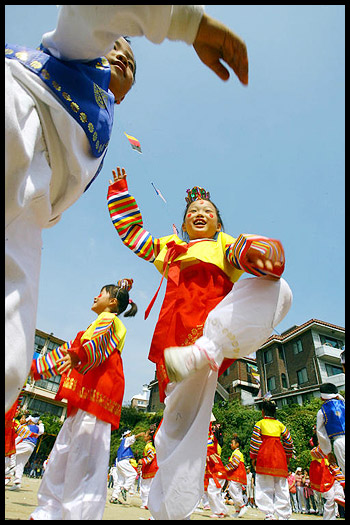 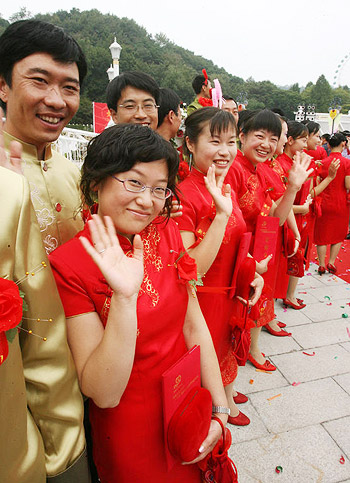 Fifty couples from the Chinese city of Qinhuangdao hold a mass wedding at amusement park Everland's Rose Garden in Gyeonggi Province on Wednesday. Korea has emerged as a favorite honeymoon destination for newlyweds. The 100 will spend theirs in Jeju./Yonhap

Mass wedding ceremony: Chinese couples invited from the country’s Hebei province walk through a garden at the Everland amusement park in Yongin, Kyonggi Province, in a mass wedding ceremony on Wednesday. The event was organized by Everland, the Korea Tourism Organization and Hebei’s provincial government to promote tourism between the two countries. 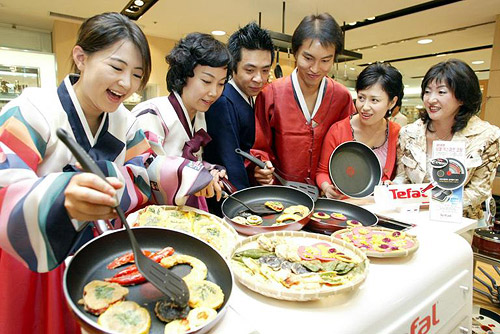 Staff with kitchenware maker Tefal cook Chuseok or Korean Thanksgiving dishes for the upcoming holiday and help customers try them at the main branch of Lotte Department Store in Seoul on Wednesday./Yonhap 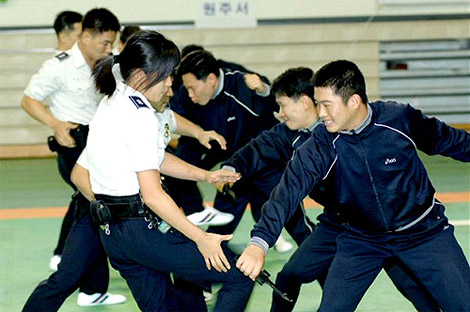 Police officers show their skills in overpowering criminals during a competition in the art of self-defense and arrest at a gymnasium in Chuncheon on Tuesday./Yonhap 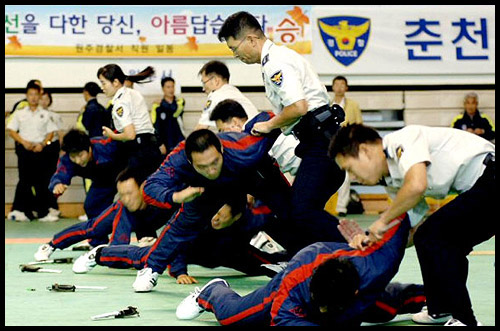 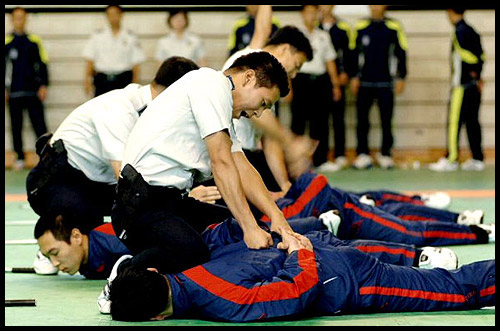 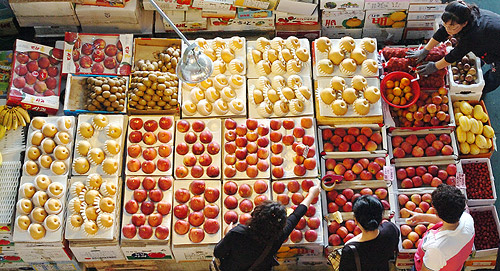 Newly harvested fruits for sacrificial services are on sale in the wholesale fresh market in the city of Gwangju as Chuseok or Korean Thanksgiving approaches. 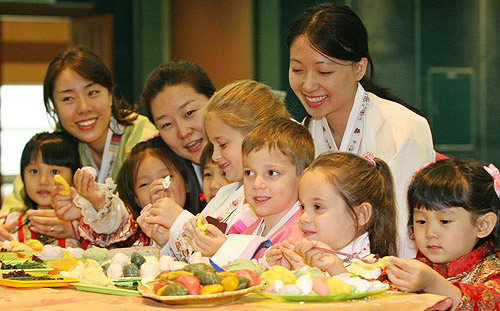 Foreign and Korean children wear traditional Korean costume and make rice cakes during an event to make dishes in obang colors -- yellow, blue, white, red and black -- to celebrate the upcoming Chuseok at COEX in Samseong-dong, Seoul, on Tuesday./Newsis

Experiencing Korean custom: Foreign children in “hanbok” hold “songpyon,” a type of Korean rice cake and main dish of Chusok, the Korean version of Thanksgiving Day, which falls on Oct. 6, during an event held by the organizer of TOYA Tableware Festival, at COEX, southern Seoul, Tuesday. The ceramic ware festival will open on Sept. 28.
/ Yonhap 09-19-2006 21:04

Koguryo wall painting and tomb: A wall painting from a tomb, left, and a stone tomb called Changgunchong from Koguryo, one of Korea’s ancient kingdoms (37 B.C.-A.D. 668). The pictures were taken in 1937 by professor Fujita Ryosaku, who also served as a director of a museum during the Japanese colonial rule, and donated to Sungkyunkwan University in South Korea. The photos were released to the press Tuesday for the first time. Along with the two photos, some 120 pictures containing images of the ancient kingdom’s heritage will be displayed during a special exhibition at the Museum of Sungkyunkwan University on Sept. 22-Dec. 22. / Courtesy of Sungkyunkwan University 09-20-2006 00:56

New way of paying: Models present an LG Telecomm mobile phone and Kookmin Bank’s new cards, being issued under a contract with the mobile carrier. If users of the cards buy LG’s phones, they can pay bills with service points, to be offered by Kookmin. Card users can collect more service points by buying more expensive products and by using their cards more often. /Courtesy of Kookmin Bank 09-19-2006 22:01

Fan dance: Members of the Seoul Metropolitan Dance Theater perform a traditional Korean fan dance for citizens at the square behind the Sejong Center for the Performing Arts in downtown Seoul Monday. / Korea Times 09-18-2006 22:50

Motor beauties: The organizing committee of the Seoul Motor Show has selected five models to promote the largest auto show in South Korea, to be held in April next year at the Korea International Exhibition Center (KINTEX) in Koyang, Kyonggi Province. Yonhap 09-18-2006 21:51

Power Dressing Is Back This Fall

Models in body paint introduce the new Infinity G35 sedan during a photo exhibition at a showroom in Nonhyun-dong, Seoul on Tuesday.
Haha, so where's the car?
Posted by papabear at 11:15 AM