Chinese fans of Korean soap operas were baffled to see Koreans use both spoons and chopsticks to eat, but not as surprised as when they saw women pull each other’s hair during fights and managers strike their subordinates on the back of the head. Other notable features of Korean society for the Chinese couch potatoes are the vast difference in treatment meted out to rich and poor here and the number of marriages of convenience. In all, the China Finance Information Network drew up 80 strange Korean customs as gleaned from TV dramas. Here are 12 of them:

1. When Koreans lift their glass to drink any alcoholic beverage with someone senior, they always turn to one side.

2. If a Korean’s glass is empty they pass the bottle to the person sitting with them. (In Korean culture it is frowned upon to pour yourself a glass; the proper etiquette is pouring for each other.)

3. Koreans are already putting the next bite of food in their mouths before they finished chewing the last bit.

4. Koreans use chopsticks for the side dishes but spoons for rice and soup.

5. If a Koreans suffer indigestion after meals, they treat it by pricking their fingers with needles. (This is an old folk remedy.)

I guess Chinese people haven't had a chance to watch Dynasty. While physical violence is generally frowned upon in Confucian culture, still... I think I've seen female Taiwanese legislators pull hair while fighting... then again maybe Mainlanders aren't allowed to watch television coverage of the Taiwanese government at work.

8. When someone hits a subordinate, it is always on the head, and most often across the back of the head.

9. The wealthy have contempt for those without, and those on the lower rungs kiss the feet of their superiors. Korean society treats the wealthy and the poor completely differently.

10. If you go into a house you must take off your shoes.

Now, "back in the olden days," Chinese people wore shoes indoors, because we had dirt floors and not a floor covered with a mat or rug. We also had chairs, and did not sit on the floor. Still, I know a lot of Chinese (HK, Taiwanese) who take their shoes off indoors... I suppose on the Mainland things have been a bit different.

11. After sleeping, the blankets and pillows go in the closet. If Koreans go into a room, they always shut the windows and doors.

As in Japan, before the Japanese adopted Western floors and beds and domestic arrangements?

12. Many marriages are arranged for expediency or convenience.

Now i find it hard to believe that this would be puzzling--the notion of marrying for romantic love is relatively recent in China too, especially since "romance" was seen as a decadent Western idea, and somewhat taboo in Mao's China, as far as I know. But perhaps with the younger people the old Chinese ways would be foreign to them as well. 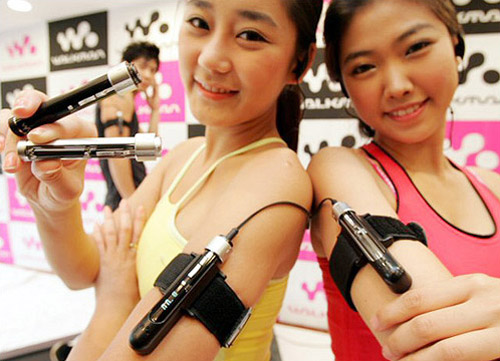 Models show off Sony’s Walkman NW-S200 at a product launch in Seoul on Monday. The MP3 player walkman can monitor real-time calorie usage and distance traveled and support various playback options including “Music Pacer” and “Shuffle Shake” according to the intensity of activities./Yonhap 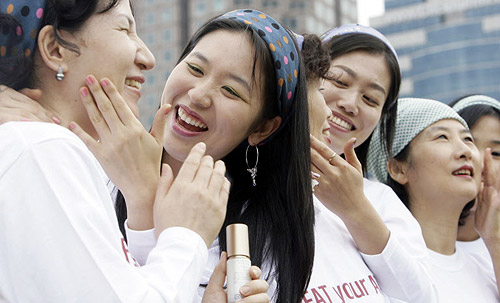 Daughters massage their mothers’ face at an event hosted by Amway to mark the release of its anti-aging cosmetics line Treatage at Yeouido Park in Seoul on Monday. 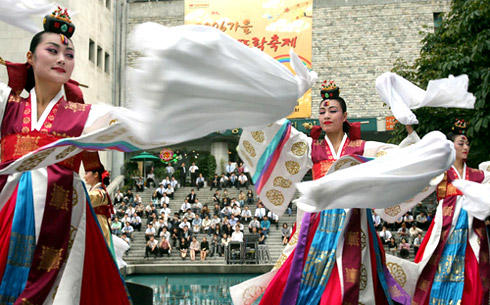 Dancers in traditional costume perform at the 2006 Fountain Garden Festival at the Sejong Center for the Performing Arts in Seoul on Monday. The show takes place weekdays from 12:20 p.m. to 12:50 p.m. from Monday to Oct. 19./Yonhap 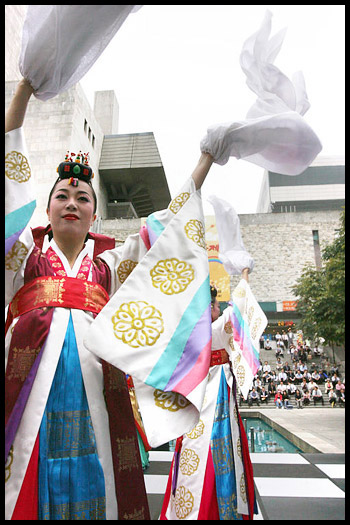 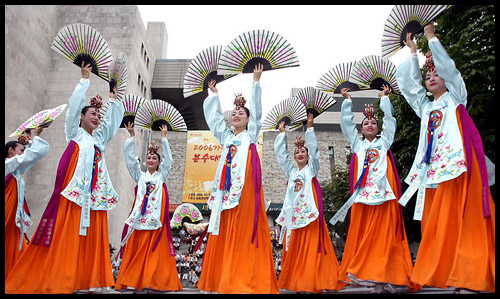 Michelle Wie Finishes Last Among the Guys Again
Posted by papabear at 5:52 PM