Review of Our Happy Time

A Superior Weepie About the Meaning of Compassion

The film “Our Happy Time,” which went on general release on Thursday, tells a doomed love story between a woman who longs for death and a man who is being forced to face it against his will. The movie has all the typical elements of a melodrama, and the simple plot makes it easy to predict what the two have been doing and will be doing next -- and that is just what happens. What makes the movie special is the undeniable charm of the two young stars and the director’s ability to express nuances. The film is an excellent choice for those who are looking for a weepie this fall. 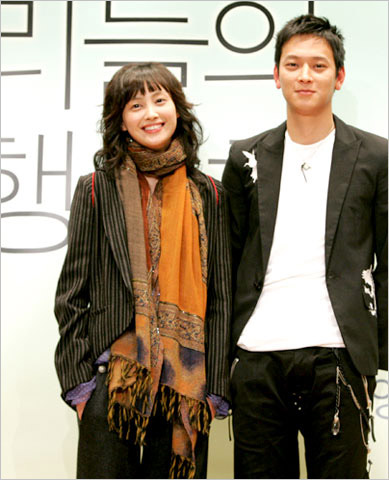 Lee Na-young and Kang Dong-won pose for a photo during a press conference for the film ‘Our Happy Time’ on Tuesday.

After failing to kill herself for the third time, Lee Na-young’s character comes to visit Kang Dong-won’s character, a prisoner sentenced to death. Imprisoned for murdering three people, his initial response to her is cold, but soon the walls between them break down and they tell each other of their painful past. Lee and Kang, whose strength lies in expressing the weaknesses of human beings, are ideally cast in a film about understanding and love between those with an excruciating pain in their heart. 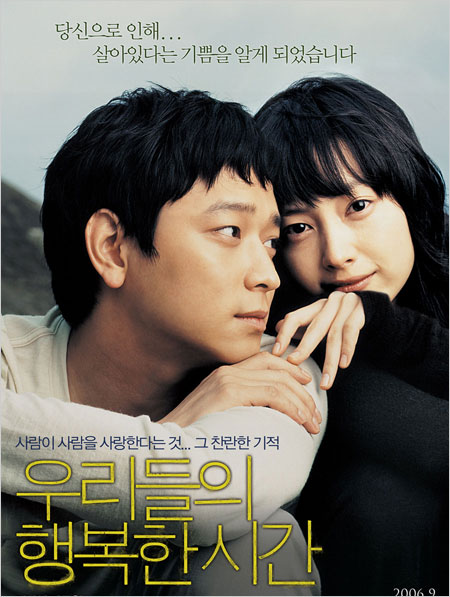 A poster for “Our Happy Time”

Lee proves that she is fully capable of taking the lead in a film. She confesses a past that she has been hiding in sentences broken by the difficulty of doing so. That is what makes it so moving. Where “queen of tears” Jeon Do-yeon expresses her characters’ pain by weeping copiously, Lee desperately tries to fight her tears. Kang also acquits himself more than honorably by perfectly inhabiting a character where audiences can focus on his acting rather than his pretty face. Since ambition is the first step to becoming a great actor, Kang’s future in the craft looks bright.

Song Hae-seong, who directed “Failan,” again showcases his uncanny ability to understand when he should make his audiences cry or wipe their tears away. His skill in showing changes in the character’s view of life with seemingly trivial actions adds vitality to the well-worn story. This melodrama is less about love than about compassion: both rich and poor, killers and suicides are entitled to our compassion. While it cannot save the dying, it can be a warm blanket that helps them withstand the sense of futility in life. But wait: isn’t compassion the very thing that lies at the heart of love?

Scotch toast: Torquhil Ian Campbell, left, the 13th Duke of Argyll in the United Kingdom and hereditary master of the royal household in Scotland, toasts VIP customers with Royal Salute whiskey in the courtyard of the British Embassy in Seoul, Wednesday. /Courtesy of Jinro Ballantine’s 09-14-2006 14:28 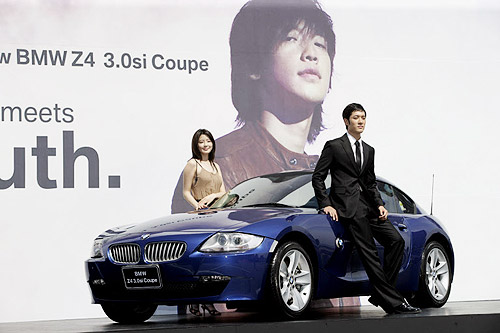 Michelle Wie of Honolulu watches an errant tee shot Thursday on the 13th hole during the first round of the 84 Lumber Classic golf tournament at Mystic Rock Golf course in Farmington, Pa. / AP-Yonhap

Korean submarine: Sailors line up on the Navy's 1,200-ton submarine the SS 066 Lee Jong Mu anchored at the port of Chinhae, South Kyongsang Province, Thursday. The submarine built in 1996 has posted an all time record for the Navy of 10 years without any accidents at sea. /Yonhap 09-14-2006 20:10 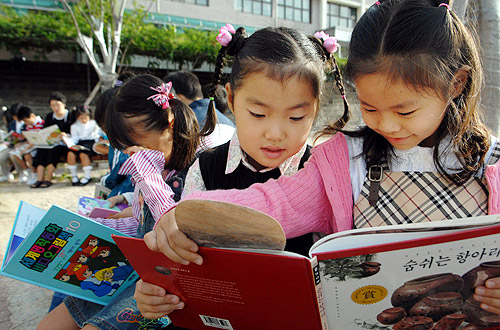 Students of Bongrae Elementary School in Malli-dong, Seoul read in the schoolyard on Thursday morning.
Posted by papabear at 12:58 AM