NLM: The Book that Explains it All: Gregorian Chant, by David Hiley.
Posted by papabear at 11:58 PM No comments:

Miranda Lambert, "The House That Built Me"

Her website. Myspace. A gallery.
Posted by papabear at 11:57 PM No comments:

Labels: Miranda Lambert, music
The Saint Anthony of Padua Institute has its own youtube channel for its Manhattan Forum lecture series.
Posted by papabear at 6:31 PM No comments:

HOW MUCH OIL IS LEFT?
Von Lars Schall
Wednesday, 7. April 2010
One of the world’s foremost educators on Peak Oil, Richard Heinberg, in an exclusive interview for MMNews: “We are currently seeing the end of economic growth as we have known it.” Further on, he talks about the financial / economic crisis, monetary changes vis-à-vis a shrinking energy supply, and the Century of Declines: “Peak Everything.”

Another photo of Lee at Appomattox 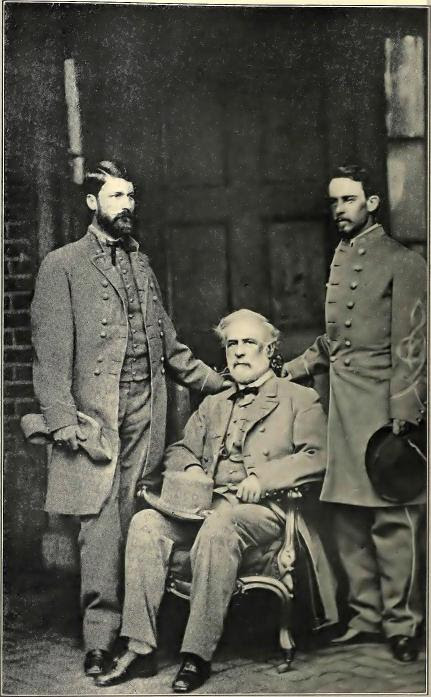 On my next trip to Virginia, I'll have to visit Arlington House.
Courtesy of Son of the South.
Posted by papabear at 3:17 PM No comments:

Labels: Daniel Larison, paleoconservatism
I have been waiting for someone at Chronicles to write a piece in response to Virginia's Confederate History Month controversy, but nothing has been published online yet. In a comment on PJB's article, Dr. Wilson writes:

What a disgusting mess of a pseudo-country the U.S. is. My family on both sides were here in the 1600s and played a modest part in everything since. And I am lectured about my own evil history by someone named Ramesh Ponurru The U.S. is not a country, it is a dead carcass being picked over by international con artists.

Who can sympathize with the white Southerner? Looking at the other passengers watching Anderson Cooper's program, I couldn't figure out what their reaction was. Were they thinking that the proclamation was typical of the backwards, racist South? If Southerners do not stand up for themselves, who else will? No one else can do the work of rebuilding their communities and dealing with outsiders who continue the transformation of the South.
Posted by papabear at 2:41 PM 1 comment:

Counterpunch roundup for the week

Chipotle, Baja Fresh, El Pollo Loco--would it suffice to eliminate the rice and beans to make their fare primal diet-friendly?

Chipotle has been praised (especially by Rod Dreher) for going local with respect to obtaining chicken. (But it hasn't done away with long supply chains, has it?) I've been to Chipotle once, so I don't know if I could say its food is better than that of Baja Fresh. I'd go to El Pollo Loco more often if it weren't so expensive, but for the grilled chicken primarily. I think its burritos are too small for the price. Boca Grande has decent burritos for a restaurant chain, but I've seen Boca Grande only in Boston. The Mexican fast-food chains seem to be popping up everywhere. (I've seen plenty of Baja Fresh restaurants in Boston.) But I don't think they can compare to the locally-owned chains in Phoenix, for example.

Aqui Cal-Mex Grill claims to use organic ingredients, but is the meal worth the price? I don't know if it is owned by the same person who operated Harvest, but the food at Harvest (especially the chicken) could be dry at times. What are the good Mexican full-service restaurants in the area? (Or Puerto Rican or Cuban restaurants, for that matter. Columbian? (Last week I walked by an Argentinian rodizio in Paducah. How different is Argentinian rodizio from the Brazilian version?) Casa Vicky's is good, but that is in San Jose.

I wouldn't say that good Mexican food is the least objectionable aspect to Mexifornia, but it comes close. (The purported vibrant Roman Catholic orthopraxis of Mexican immigrants remains to be confirmed.) Still, how healthy is authentic Mexican food, compared with the standard American diet?

I hope KK makes Mexican food for the MD's baby shower, with a lot of leftovers... haha.
Posted by papabear at 11:25 AM No comments:

An inconsistency in Anna's worldview?

The new version of V once again plays up the old sci-fi dichotomy between reason and emotion. (This existential conflict was absent in the 80s version.) The Visitor leader, Anna, believes that the Visitors are superior to the humans because they do not have to deal with the messy emotions that plague the humans. This allows them clarity of thought and a focus on purpose. Moreover, Anna expects complete devotion from her subjects; she is supposed to be their god, their whole purpose in life. They are so fanatical that they are willing to commit suicide in order to show their loyalty and devotion. In return for their service, she periodically provides them with a sense of euphoria, which is called "Bliss," which is also understood to be some sort of psychological union with Anna. But is this consistent? Cannot the the quasi-religious adoration of the lizard queen Anna, along with the pleasant reward of "Bliss," be reduced in some way to some emotion that they are experiencing? Is this apparent inconsistency deliberate on the part of the script-writers, to show that Anna is a self-serving tyrant? Or is it one more example of how scifi's misunderstanding of human nature leads to problems of coherence?

The Archdruid Report: The Twilight of the Machine

The Archdruid Report: The Twilight of the Machine
Posted by papabear at 10:00 AM No comments:

So the first cut of Clash of the Titans might have been a better movie than the theatrical cut. But is it any less irreligious? Maybe I'll have to re-watch the original, to refresh my memory about its spin on the gods.
Posted by papabear at 9:56 AM No comments:

NLM: Holy Week at the Benedictine Monastery of Norcia, Birthplace of St. Benedict and Easter in the Ambrosian Rite - Part III
Posted by papabear at 8:22 PM No comments:

While sitting at Logan this morning, I caught part of Anderson Cooper's program on CNN; he was discussing Virginia Governor McDonnell's decision to declare April Confederate History Month for the Commonwealth of Virginia, and his apology for failing to mention slavery. (More from Anderson Cooper.)

Featured was a CNN analyst, who was also African-American, who equated Confederate soldiers with Nazi soldiers and domestic terrorists. There was also a representative of the Sons of Confederate Veterans, who was trying to present the South's viewpoint: that it wasn't all about slavery. The nationalist account prevails among the MSM -- Jon Stewart repeats it on his own show. I am quite sure that it is a standard component of the analysis offered by those who oppose the proclamation, whether they are part of the MSM or not.

Didn't Ted Turner claim to be of the South? He did bankroll the production of Gods and Generals, after all. How did he react to Mr. Cooper's take on the Confederacy, offered on the cable news network that he created?

Why do people even bother to discuss this? For Southern conservatives there may not be much of a point, since it is unlikely that they'd be able to persuade adherents to the nationalist view. There are irreconcilable differences concerning the US Constitution, states' rights, regional conflicts before the War to Prevent Southern Independence, and the complexity of the causes of that war. One is left with assertions by both sides, with few opportunities for substantial proof. (Though I was impressed by the SCV gentleman's calm and politeness in debate with his opponent. I'm sure there were liberals waiting for him to show his real side, that is his racism.) The MSM, on the other hand, will take any opportunity to bash the South, make Southerners look racist, and to uphold the proposition nation and nationalist understanding of the Federal Government.

Now, a Southern conservative should ask the question of whether such proclamations poison to black-white relations in Virginia and elsewhere? But how much should be given up by Southern whites for the sake of fostering good relations? Having repudiated slavery as an institution, should a Southerner also give up his heritage and (political) tradition in order to placate the descendants of former slaves? Is there nothing good to the Southern tradition? Eugene D. Genovese offers a more balanced view of the Southern tradition. Can African-Americans be persuaded of the rightness of state sovereignty without the memory of the Confederacy? If not, and racial conflict is inevitable, then can whites be blamed for holding on to their own identity? (I note that the League of the South does not endorse racism, and welcomes all those who would agree with its goals. The LoS would be in a good position to assess whether its ties to Southern history and culture and the Confederacy is an obstacle to recruiting African-Americans to its cause.) Is it possible for whites and blacks to start anew, with a blank slate replacing history and culture? The liberals of the MSM and other states, along with the professional race-baiters should mind their own business and leave it to the whites and blacks of the South to work things out, instead of proclaiming distortions which only serve to increase the sense of injury and animosity among African Americans. 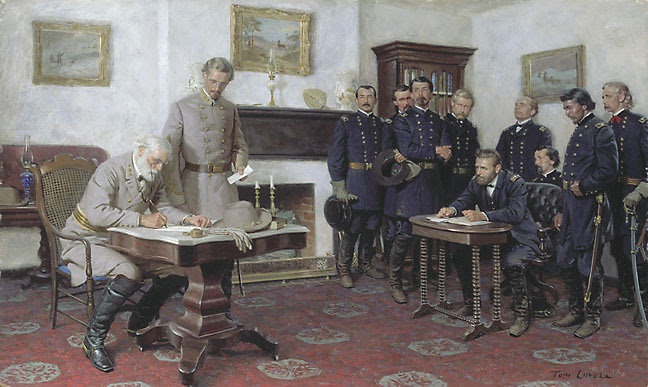 The complete version of the painting, Louis Guillaume's "Surrender of General Lee to General Grant, April 9, 1865": 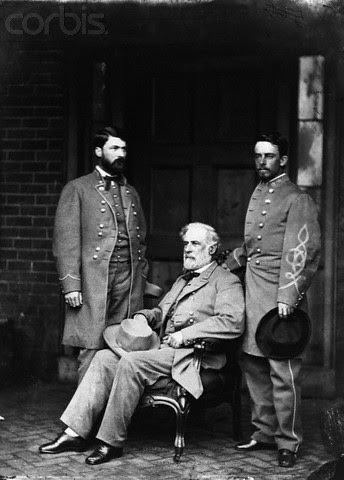 Sandro Magister, The Passion of Pope Benedict. Six Accusations, One Question
Posted by papabear at 1:25 PM No comments:

I'm currently in Boston, having taken the red-eye flight from SFO last night. I couldn't get any good sleep on the plane, which was full. My neck was hurting and when I got off the plane this morning, so was my back. (I also had mild sciatica.) Since returning to the apartment, I've been sorting through papers and jotting down notes...
Posted by papabear at 8:26 AM No comments:

John Robb, THE THREE HORSEMEN OF THE GLOBAL DEPRESSION
Posted by papabear at 5:59 PM No comments:

Labels: 4GW, John Robb
Zenit: Pontiff’s “Urbi et Orbi” Message
“We Are Free, We Are Saved”
Posted by papabear at 4:50 PM No comments:

Peak oil - arriving or already arrived - is placing a tremendous strain on the world's economy. Because of this strain, the kind of money used for maintaining roads is quickly disappearing and the result is the return of unpaved roads. ... in the coming years we'll see more and more roads returning to gravel, as it was commonplace in the Western World up to about 50 years ago.

Posted by papabear at 2:05 PM No comments:

Labels: peak oil
Theodore Dalrymple on Self-Esteem vs. Self-Respect (via Rod Dreher)
Posted by papabear at 2:00 PM No comments:

Labels: Dalrymple, virtues
Rod Dreher: A foodie paradox: It's expensive to eat poor
Posted by papabear at 2:00 PM No comments:

Some comments to Dr. Wilson's latest have lead me to think about the accent(s) I heard this past week. Mr. Daniel Maxwell refers to the "the ‘generic’ Southern accent that I hear spoken by Kentuckians and Tennesseans." I couldn't distinguish between any of the accents that I heard in Western Kentucky and Nashville -- there was the "typical" drawl, with the elongated vowels and syllables -- the one associated with a lack of sophistication? I couldn't help but think that after encountering certain people. But I liked the sound of the judge's speech.

Dr. Wilson (naturally?) holds the Carolinian accent in high esteem. What then, of the loss of non-rhotic Southern accents? I have to say that I prefer the sounding of the r.

It's been a while since I've heard from LAB, who is originally from... I want to say Tennessee. She has a pleasant accent, coupled with a soft voice. I'll attempt sending an e-mail.
Posted by papabear at 11:49 PM No comments:

Labels: chant
Josh Ritter and the Carolina Chocolate Drops will be performing at the Fillmore (1805 Geary Blvd, San Francisco) on Thursday, June 24th, 2010 at 8:00 PM.

Zenit: Pope's Holy Saturday Homily
"The Cure for Death Does Exist"
Posted by papabear at 9:57 AM No comments: