Should have accomplished more today; at least I did get some insecticide work done. In the afternoon I headed over to xiao Jimmy's house to meet up with some HS friends. Found out that one of them had gotten engaged and will be married in September of this year. It was good to see SC's baby. Xiao Jimmy's baby seems to be bigger. Went to Red Robin with SC and DY -- can't say that the hamburgers agreed with me. Something about the seasoning that they use for the patties really destroyed my appetite. Not sure what it was. After being non-primal for so long, I can't say that it was a good reaction, but maybe there is something questionable about the seasoning.

This morning I went to Cooking Papa for lunch with my mother to give it another chance. "Fail." The beef chow fun was burned, and the pan-fried noodles were bland. How sad. Never going there again. I don't understand the popularity of the place, except for the fact that there is no Chinese restaurant in the area that offers comparable food. (Maybe Top Cafe comes close, along with Joy Luck Bistro, but those places are not that good, either.)

Last week, when Sarge was here, we went to Tomi again. Probably the best Chinese buffet in the South Bay, but Moonstar is still better.
Posted by papabear at 10:29 PM No comments:

How We Were
A Rural Memoir
Posted by papabear at 11:37 PM No comments: 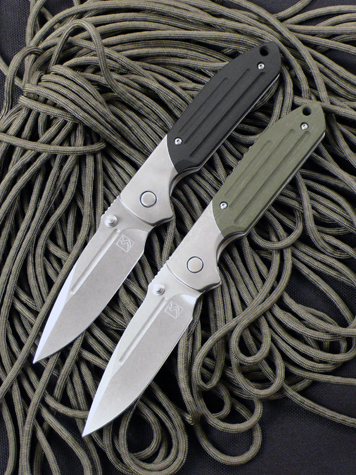 It still sold out in less than 5 minutes -- Brad Southard's version of the Dauntless. Guess there are some rich TAD fans out there. I don't like the look of the handle, but if it works...

Is it the case that priests and spiritual directors are no better than most contemporary marriage counselors and therapists because they "enable" women in their vices and bad choices, rather than admonishing them, especially with respect to how they conduct themselves in their marriages towards their husbands? I wouldn't be surprised if many priests and male religious lack awareness of the characteristic faults of women, or have a good idea of what marriage should be like (and the different roles of husband and wife). There does seem to be a crisis of masculinity in the Church.

Would it be so bad to make celibacy optional for priests? What sort of political economy would we need that would allow for priests to be drawn from the ranks of older, married men, men who have some experience of married life and leadership?
(What about the requirement for sexual continence before the celebration of the Eucharist?)

I have seen traditionalist priests wear a black button sweater over their cassock, but when I saw this recently I couldn't help but think that there was something wrong with this--it even led me to question whether the cassock was sufficiently masculine. Some version of a pullover sweater might be better.

I'm not sure if my reaction that this was wrong was due to the sweater's association with the elderly, or if it just seemed a bit too unmanly.
Posted by papabear at 10:04 PM No comments:

Labels: Steve Martin
My Kind of Country: Album Review: Gene Watson and Rhonda Vincent – ‘Your Money And My Good Looks’

CMT
Posted by papabear at 5:17 PM No comments:

Labels: Rhonda Vincent
Jeffrey Polet recommends FNL: Friday Night Glee. I'll continue to watch it until its final episode, but I think the good elements are outweighed by the bad elements, such as the show's sexual permissiveness and Coach Taylor's ineradicable beta-hood at home.
Posted by papabear at 5:06 PM No comments:

JK links to the following on his facebook: Vatican Official Backs a Next Step for Multiculturalism


But, he said, more than multiculturalism it would be good to speak of interculturalism. The first term, the prelate proposed, simply describes two or more cultures in the same space.

Interculturalism, meanwhile, connotes "stable relations between the cultures present in a certain geographic space and emphasizes the attitudes, the objectives to attain and the educational itineraries that lead to this encounter of cultures."

"Approach" isn't enough, he insisted, since "exchange" is also necessary -- "and not a simple exchange of what one has, but above all of what one is."

It's not about assimilation, but a two-way exchange.


Integration is "not a one way process," the 73-year-old Vatican official affirmed.

"Natives as well as immigrants must be ready to undertake the way of dialogue and of reciprocal enrichment, which makes possible the appreciation and acceptance of the positive aspects of each," he said.

In this regard, the prelate recognized, respect for migrants and their cultural identity must of course be taken into account, while on guard for elements "contrary to ethical and universal values, or to fundamental human rights."

The right to migrate is not the same as the right to enter into a political community, even though in our world, with the claims of sovereignty to justify land grabs, it is not possible to migrate without doing the other. But there is an obligation for those who are migrating to adopt the customs of the new community, for the sake of harmony and the common good. I disagree with the archbishop -- cultural exchange is not a two-way street, nor is it equal (especially since those who are immigrating rarely bring high culture with them).

This obligation extends to anything which is ordered to the political common good, and does not include religion. However, the archbishop is correct to point out that religion is inseparable from culture (and identity).
(religion? identity - people). If a people keeps themselves separate, not allowing intermarriage with members of a host community, is there really one community with two peoples, or two communities? (European history - the Jewish question?)

Is there any depth or substance to the archbishop's comments? What is quoted in the article seems like vague generalities ("values"). One is left with the impression that he did not offer anything to show how two different cultures mesh together or elaborate what is included under culture. The customs and laws of a community are much more important than the material artifacts expressing the worldview of a community. What will then adjudicate when there is a conflict between customs? For example, customs pertaining to marriage -- who initiates and whether one asks for approval from the parents, and which side pays dowry. Another example is that of address and respect -- do children call everyone by their first name, or do they use titles of respect? I hope the archbishop wouldn't appeal to some form of liberalism disguised as natural law morality as a third standard by which to judge the two.
Posted by papabear at 10:30 AM No comments:

Long day... and I woke up late! The alarm didn't register. Got to work about 20 minutes late. No good. Fortunately school is almost over. Stayed to help with the retirement party. When I came home I took a long nap. I feel warm and a bit sick. I may have picked up a cold from someone.
Posted by papabear at 11:17 PM No comments:

The Party of Greed?

That would apply to both of the major parties. Calling the Republican Party the Stupid Party doesn't seem to go far enough...

Paul Gottfried, Dead Center
The Republican establishment courts the left and repudiates the right.
Posted by papabear at 3:24 PM No comments:

The Director's Lodge
Posted by papabear at 3:20 PM No comments:

An excerpt from Joel Salatin's latest

The Sheer Ecstasy of Being a Lunatic Farmer

See also Gene Logsdon and His Books.
Posted by papabear at 3:17 PM No comments:

Posted by papabear at 3:13 PM No comments:

The National Government continues to be incompetent

"The daily amount of servings for each food group won't change."

I expect to see some commentary on Thursday from paleo diet blogs.
Posted by papabear at 2:15 AM No comments:

How Offshoring Has Destroyed the Economy
By PAUL CRAIG ROBERTS

A Pigpen for the Backyard
Gene Logsdon, The Contrary Farmer, Mulligan Books

Loose talk about pigpens in the yard will send the blood pressure soaring in the veins of local zoning officials, if not your neighbors. It’s perfectly all right in our culture to keep a dog half the size of a cow in the yard, letting it bark all night and running all over town dropping manure in its wake. But a quiet, clean hog producing something useful like pork chops? Heaven forbid.
Posted by papabear at 9:18 AM No comments:

Labels: Gene Logsdon, Paul Craig Roberts
Off to Sacramento today... Sarge will be leaving tomorrow.
Posted by papabear at 9:08 AM No comments:

Labels: my so-called life
From Rorate Caeli: The Church Must Endure this Anger - Martin Mosebach on Universae Ecclesiae

Ensemble Cinquecento - via the comments to a post by Fr. Z.
Posted by papabear at 1:40 AM No comments:

Stanford Music Calendar of Events
Posted by papabear at 12:00 AM No comments:

Labels: Gary Taubes
Let us pray for those who have given their lives in defense of this country or who who have suffered gravely as a result of their service.

Memorial Day should be important even to those who are anti-war, but Armed Forces Day, which was several weeks ago, is a different, as it is a celebration of Union institutions...

Posted by papabear at 8:59 PM No comments:

Labels: US Army
The CIA Accurately Predicted How Long World Oil Supplies Would Last—in 1978 by William Hicks (EB)
Posted by papabear at 8:42 PM No comments:

The Holy Monastery of Simonopetra

Posted by papabear at 3:50 AM No comments:

Posted by papabear at 3:48 AM No comments:

What’s Good? Wherefore Ought?
Thaddeus J. Kozinski, May 11, 2011
Only an ethics rooted in the divinely revealed truth of creation-as-gift and creator-as-love can coherently and adequately make sense of the universal experience of ought.

Thoughts About Oughts
Christopher O. Tollefsen, May 13, 2011
The requirements of natural reason in the pursuit of goods provide a more adequate starting point for moral reflection than the theological considerations in which moral reflection should come to its fruition.
Posted by papabear at 3:34 AM No comments: