Peter Hitchens on the Suffragettes

He doesn't seem to go far enough in his criticism of the axiom for which they acted, egalitarianism.
Posted by papabear at 11:08 PM No comments:

Labels: egalitarianism, feminism, history, Peter Hitchens, UK
Sandro Magister: The China Invented by Bishop Sánchez Sorondo. His Diary From Half a Century Ago Has Been Discovered
Posted by papabear at 12:29 AM No comments:

Getting the Alt Right Wrong

Matthew Rose offers another genealogy of the alt right that is limited to the European nouvelle droite.

I'm pretty sure Dreher knows of Theodore Beale's existence. And he is probably not completely ignorant of paleoconservatism and its influence on the alt right. And yet he offers no modification of Roses's article.
Posted by papabear at 12:00 AM No comments:

Bishop Schneider to Be in San Jose

Posted by papabear at 6:04 PM No comments:

More on Cardinal Zen and the Curia

Sandro Magister: Chinese Bishops Illegitimate, Official, Clandestine… Which Ones Francis Is Rewarding and Which He Is Not and Zen: "The Vatican Secretary of State Is Wrong"
Posted by papabear at 4:11 PM No comments:

“There’s never been a more important time than now for men to step up.”

God Save Women From Other Women by Christopher DeGroot

Posted by papabear at 6:57 PM No comments:

Jordan Peterson doesn’t go nearly far enough
The Canadian psychologist may speak to millions – but not to me
Posted by papabear at 6:36 PM No comments:

This Is How the Deep State Becomes Leftist

Posted by papabear at 5:28 PM No comments:

But that sort of "natural conservatism" is not enough, when the host population is not put on the same level as other ethnic Chinese, and there is no real integration into the host society. The Chinese diaspora is envied and regarded with suspicion by host populations, and for good reason. When the Chinese disapora gains too much control over commercial wealth, things can get deadly, and there is a good reason why one of the 16 Points of the Alt Right addresses this. (It is not applicable only to the Pharisee diaspora.)

The Chinese in Southern Vietnam by Linh Dinh

Posted by papabear at 3:20 PM No comments:

iHeartRadio has its stations dedicated to 80s music...

AmConMag: ‘Dare To Be Different’: How Gen X Perfected Alternative Radio By Greg Kaza
A new film charts the outsized influence of Long Island indie station WLIR in the 1980s.

Posted by papabear at 3:14 PM No comments:

Paul Craig Roberts: Will The Conspiracy Against Trump and American Democracy Go Unpunished?
Posted by papabear at 2:58 PM No comments:

The President of the Pontifical Academy of Sciences exalts China as the best implementer of the Churches’ social doctrine. The bishop seems oblivious to the shantytowns of Beijing and Shanghai, the expulsion of migrants, oppression of religious freedom. Appreciation for the Paris Climate Agreement, but silence on the links between wealth, corruption and pollution. An ideological approach that makes a laughing stock of the Church.

Msgr. Sanchez Sorondo: China, the best implementer of the social doctrine of the Church

Posted by papabear at 2:51 PM No comments:

Southern Speech by Roger W. Cole
Posted by papabear at 5:41 PM No comments:

"The Wonder of Us"

Posted by papabear at 4:30 PM No comments:

Flattery for the sake of greasing the wheels for a Vatican-China agreement? What is going on here?

Collectivism is not the same as concern for the common good. Another bishop with a deficient understanding of political theology...

Vatican Insider interview
Posted by papabear at 4:02 PM No comments:

Fading Away Into Irrelevance

The Changing Face of the Boy Scouts of America

Cuckservatives everywhere.
Posted by papabear at 10:22 PM No comments:

A Lot of Racist Stereotyping in This Commercial

Could his eyeglasses be even thicker?

Hopefully This Movie Will Be a Solo Shot

Posted by papabear at 6:17 PM No comments:

One of the few movies I'll watch this year?
Posted by papabear at 6:12 PM No comments:

More like a Special Activities Division Ground Branch operator than a intelligence analyst. Tom Clancy would probably approve of the change for his Marty Stu character.

Apparently some football players will do anything for money.

Posted by papabear at 5:57 PM No comments:

Posted by papabear at 5:56 PM No comments:

Mountain Guerilla and Max Velocity Tactical have made similar comments about what comprises advanced skills and the necessity of drilling in small unit tactics. I believe both authors are ex-SF operators, both Ranger-tabbed? If so, that may explain why they are concerned with SUT. Is it the case that certain ex-military instructors (especially from counter-terrorist units) are too concerned with weapons manipulation (shooting, shooting from different positions, and shooting with a mix of physical exercises in between, etc.) and not realistic combat drills for people learning to work in groups?

Will we see a new trend of ex-military who had completed Ranger school or been in a Ranger bat offering classes in SUT as a way to distinguish themselves from other instructors? There is a need for such instruction, especially for civilians seeking to prepare themselves for the duty of serving in [informal] militia groups, which the Founding Fathers understood as being incumbent upon all [male] citizens.

Why wouldn't a man want to read through the Ranger handbook and pick up some more skills in addition to the skills he learned in scouting as a boy, either from a scout troop or from family?
Posted by papabear at 12:00 AM No comments:


The archbishop said “Christian equality” understands “the reality of the differences and mutual dependencies of real men and women.”

“As men, we’re hardwired by nature and confirmed by the Word of God to do three main things: to provide, to protect, and to lead – not for our own sake, not for our own empty vanities and appetites, but in service to others.”

Edit.
Here is the full text of the speech: Memory, Sex, and the Making of "The New Man"

"Just as memory anchors each person’s individual story, history plays the same role for cultures, nations and communities of faith. History is our shared memory."

Yes, it is. So why is the Latin hierarchy pushing for multiculturalism in the U.S.?

We men – all of us, both clergy and lay — bear a special responsibility because the Gospel tasks us as leaders. That doesn’t make us better than anyone else. It takes nothing away from the genius of women or the equality of women and men. But human beings are not identical units. We’re not interchangeable pieces of social machinery. Christian equality is based not in political ideology but in the reality of the differences and mutual dependencies of real men and women. As creatures we’re designed to need each other, not replicate each other. And this, by the way, is a key reason why modern culture is so conflicted about the body.

The egalitarianism can be explained with respect to "human dignity" or the dignity of their ultimate vocation. But is this more "complementarian" than patriarchical?

This is arguably blue pill:


Those are some of the don’ts. The dos are equally obvious. Do love the women in your life with the encouragement, affection, support and reverence they deserve by right. Do be faithful to your wife in mind and body. Do show courtesy and respect to the women you meet, even when they don’t return it. Chivalry is dead only if we men cooperate in killing it – and given the vulgarity of our current national environment and its leaders, we certainly need some kind of new code of dignity between the sexes.

Archbishop Chaput's speech was also posted at Crisis. A commentator notes that what will bring men to church is a reverent liturgy; unfortunately Archbishop Chaput is not a follower of Benedict XVI's plan for liturgical renewal.

The Common Good and the Nation-State

The Imaginative Conservative: Did the Constitution Kill the Common Good? by Thaddeus Kozinski

Did I write anything about this in 2015, when the essay was originally published? Apparently not.

Not many quibbles -- Kozinski writes, "In 1787, America was a full-fledged nation-state, though in latency in extent and scope." Well, not a single nation-state, but a federation of states.

Let us agree that the nation-state, in whatever configuration it happened or happens to be (Federalist or Anti-federalist level of centralization, libertarian-market or welfare state, Republican- or Democrat-controlled, lower or higher taxes, Tea-Party or Occupy Wall St. ethos, George Bush or Barack Obama, is what it is, that is, an alliance, not a common-good institution, suitable for and capable only of providing goods and services to those polis organizations that can (but only with the Alliance’s instrumental help, as the instrumentlist insists) embody and keep common goods. Thus, it is just good philosophy to recognize what is and must be the case, and to act upon it. This, to me, is where Prof. George and the instrumentalists are coming from. Whether he would prefer to live under a state that could indeed keep a common good, such as a medieval French city or an ancient Greek polis, it doesn’t matter; for, the nation-state is here, and here to stay, and we must accept its exigencies and limitations so that we can work with it to uphold the mediating institutions that alone can secure those common goods that we need to flourish and get to heaven.

This is one way to save Roman Catholic Social Teaching on the state and the common good, which is upheld by George, and the reason why he takes the position that he does -- he isn't doing political philosophy, but theology.

In short, for the intrinsicist, the nation-state, absent any polises in which the political good is more than instrumental, will cease being a mere alliance, if it ever were a pure one, and turn into a monstrous anti-polis, pursuing anti-goods to the detriment and eventual eradication of the common good as well as individual goods.

I would argue that real poleis are not absent wholly without design; part of this is deliberate on part of the state. Whatever one may think about the political good proper to a federal union or to a political unit the size of the nation-state, historically those ruling a nation-state have held it to be superior to any other political good. There has been an increasing concentration of political and economic power in the hands of the few.

What if the ability of smaller intrinsic-good-embodying-and-enabling communities to survive and flourish requires the larger society in which they exist to itself be embodied politically in a more-than-instrumental way? What if the sine qua non of the solution to a government out of control and at odds with basic human goods is a radical alternative to the alliance-nation-state of America? What if we desperately need a newly revamped and reconfigured and workable Aristotelian polis, one subordinate to the Divine-polis of the Roman Catholic Church, and one workable in a contemporary context? What if the political order by nature, and ineradicably so, even the American one, is all about intrinsic goods?

We do need a polis; but not at the scale of the state, or the federal union. The desirability and necessity of different sorts of political goods at those magnitudes of scale still needs to be acknowledged.
Posted by papabear at 1:45 AM No comments: 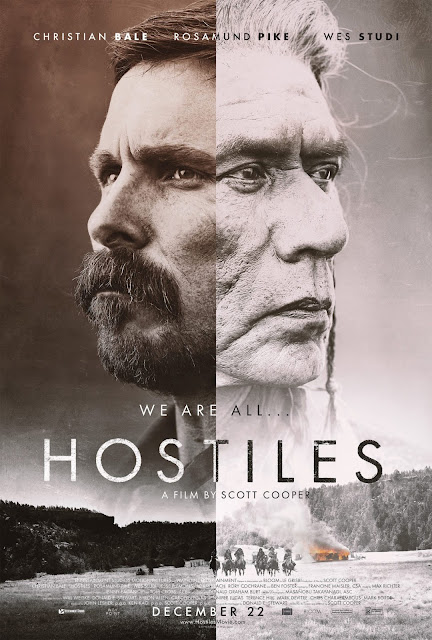 Despite the SJW lecturing in one scene and the rather heavy-handed treatment of the themes of forgiveness and reconciliation, the movie is worth a viewing by fans of the genre. The message is comparable to that of Dances with Wolves and the cinematography is beautiful.  Criticisms of the plot, with spoilers, follow below.

the long sadness By Roger McGrath