Is he making a prediction about law enforcement making use of night vision equipment? Would that be another step in the militarization of the police? It may be necessary for dealing with cartels, but when it gets turned on so-called "domestic terrorists"?
Posted by papabear at 7:00 PM No comments:

Haven't Looked at LWRCI in a While

Labels: guns, LWRCI
An interesting discussion of man purses and such in the combox at Vox Day (satchels, anyone?) -- see the relevant post at Alpha Game Plan for more about gamma behavior. Yeah, I was reminded of Jack Bauer's various bags, the Jack Sack. 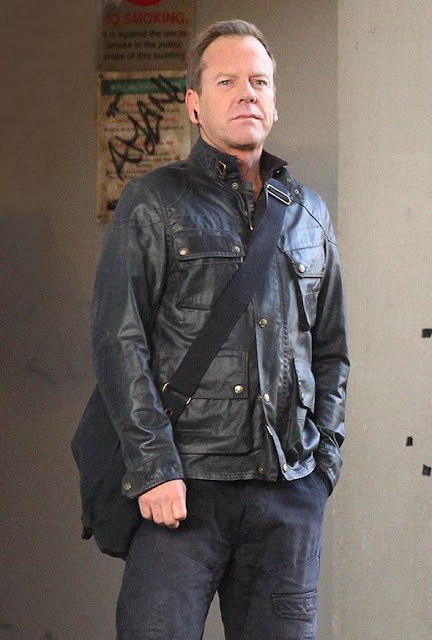 Posted by papabear at 2:50 PM No comments:

What to do about Emmy?

In a patriarchical society, how does one handle outliers like Emmy Noether?

Mostly unconcerned about appearance and manners, biographers suggest she focused on her studies. A distinguished algebraist Olga Taussky-Todd described a luncheon, during which Noether, wholly engrossed in a discussion of mathematics, "gesticulated wildly" as she ate and "spilled her food constantly and wiped it off from her dress, completely unperturbed".[52] Appearance-conscious students cringed as she retrieved the handkerchief from her blouse and ignored the increasing disarray of her hair during a lecture. Two female students once approached her during a break in a two-hour class to express their concern, but they were unable to break through the energetic mathematics discussion she was having with other students.

Famously, the mathematician Edmund Landau was asked if Noether was an instance of a great female mathematician and he replied humorously – “I can testify that Emmy is a great mathematician, but that she is female, I cannot swear.”

If men with the talent have found positions and there are still resources for a female mathematician on a university faculty, perhaps she could just give lectures without exercising a role of authority over male students. Or she could focus primarily on research/scholarship, under the headship of the men who are there. (As it is unlikely she would marry.) Or she could teach female students.

A Justification for Endless Interventionism?

The right to food is qualified; the right to access to what is necessary to produce food less so -- so are states justified in conquering other states to ensure that the people of that other state do not starve? Or is the pope merely affirming "humanitarian aid"? Making statements based on a incomplete political theology is dangerous.

Posted by papabear at 1:06 PM No comments:

Should They Return to Orthodoxy?

What future for Eastern Catholics in the West?

Posted by papabear at 1:02 PM No comments:

Where is Ivan Illich When We Need Him?

Neglected by bishops to the detriment of the patriarchate of Rome.

We should advocate for the rights of indigenous peoples everywhere including those in the West, not just those affected by the West and other industrial powers.

Posted by papabear at 1:00 PM No comments:

Still Pushing for a Two-State Solution

The Marketing of a Pope

Jared Taylor on the Alt Right

What is the alt right?

Posted by papabear at 1:19 AM No comments:

Ortho Dixie: Orthodox Christianity and Southern Identity by Stephen Borthwick
Posted by papabear at 12:00 AM No comments:

The Tradition of Limited Government

Abbeville Institute: Jeffersonian Conservatism By Ryan Walters
Posted by papabear at 12:00 AM No comments:

An Interview in Cosmo!

If the interview is in the printed edition, I hope the title is not featured next to something salacious.

What It's Really Like to Be an Exorcist By Jon Roth
Father Gary Thomas explains the real-life profession at the center of so many horror movies.

Posted by papabear at 4:29 PM No comments:

full
alt
Posted by papabear at 3:57 PM No comments:

aicn
Posted by papabear at 12:00 AM No comments:

Symbol of a Failed American Church?

The Al Smith Dinner -- fundraising, mingling with politicians, etc. What else does the dinner represent that is wrong with the American Roman Catholic Church?

Has the Al Smith Dinner Ceased to Be a Worthwhile Event for the Catholic Church? by Thomas McArdle
COMMENTARY: After three contentious debates and in final stretch before Election Day, Donald Trump and Hillary Clinton will trade humorous barbs at tonight's annual fundraiser in New York.

Posted by papabear at 4:46 PM No comments:

Don't know if DJT was able to pull in undecided or doubting Republican and independent voters.

Here is the transcript.
Posted by papabear at 12:00 AM No comments:

Google Good for Something

The Smile of the Joker

That moment when Hillary laughs at gays being throwing off buildings in Islamic countries... #debatenight https://t.co/CtbIEtzhK7

On the Use of Icons

Participation by women in a discussion of the speculative sciences may be tolerable, in so far as the arguments are more important than their authors (or their sex) but even in such discussions the political (or ecclesial) context cannot be eliminated completely, and the admittance of women to such discussion is tantamount to the claim that those women are the equal to men in the performing of that role. Perhaps when discussions are impersonal, done through journals and such, it poses less of a problem, but in a live forum, with all engaged in the discussion present? Questionable.

It is more certain that women should not be permitted to engage in political discussions or ethical discussions, especially when it concerns the behavior of men. As they have no authority over men, they have no basis on which to make demands or to teach or to exhort men to behave in a certain way. It is up to men to judge and monitor the behavior of other men. Even the unsolicited offering of advice is out of the question.

With regards to the off-the-air remarks made by Donald Trump to Billy Bush, which were leaked to the public, quite a few "social conservative" women have condemned his talk and behavior and have attempted to shame men into adopting their standards of behavior for a gentleman -- examples of women who enforce the Feminine Imperative. See The Thinking Houswife, or even more, Lydia McGrew over at What's Wrong with the World. Examples of women who suffer from puritanism, frigidity or repression? While they may labor under the delusion that they are having an impact based on their readership, that their work in educating others is valuable, how much do they deal with or lecture other people, both men and women, in real life? How much accountability do they have in real life?

It is easy to say that wisdom should be judged by its own merits when disseminated through the mass media, but in moral matters, the character and authority of the person claiming to be wise does matter with respect to their credibility. What evidence do female conservative bloggers have to establish their bona fides in the eyes of men? How do they treat the men in their own lives? And if they lived in submission to a husband or to the head of the clan, would they be so eager to lecture other men?

Posted by papabear at 6:00 PM No comments:

One Catholic Prof Aware of the Higher-Ed Bubble

Crazy clericalism at Houston’s University of St. Thomas by Dr. Randall B. Smith
Some clerics in leadership at Catholic universities give lip service to “empowering the laity”—when their real agenda is enforcing their own ideology.

Posted by papabear at 3:32 PM No comments:

One of the Flaws of Historical Dramas

Posted by papabear at 4:58 PM No comments:

Probably as true of academia too

Even though they have more time outside of the classroom to focus on "scholarship," very few are unlikely to go beyond that, except for the spinsters.

From Mailvox: Women in Science:

I have seen them work well in support roles, but not as designers. Best I can figure is women are more balanced in their approach to life, that is why the do better in school, but get blown by in most real world situation. Fact is the folks that succeed in any field are not exactly balanced, they eat, sleep, live and die by their profession. Second to these folks (not one myself) are people that do the field as a means to an end, but they are driven in some vocation that the engineering field pays for. It is a means to an end and they are still driven folks and do not want to waste their time at work.

None of the women cared enough to be thinking about the problems at lunch, when they drove in or on their time off. None of the women want to put in the hours when there is stress situation, which is when the best engineers show what they are made of.

He Seems More Sincere Than Obama or Hilary

Hilary's War Drums
Posted by papabear at 9:32 AM No comments:

Posted by papabear at 9:00 AM No comments:

Posted by papabear at 8:00 AM No comments:

Boyd Cathey on the Campaign

The Tape, the Conspiracy, and the Death of the Old Politics by Boyd D. Cathey

AmConMag: Remembering Neville Marriner by R.J. Stove
The maestro of the Academy of St. Martin in the Fields was an English gentleman.

Posted by papabear at 9:00 PM No comments:

Asura: The City of Madness

During the first half hour of the movie I was thinking about the corruption of politics in large cities -- mass politics or better, mob politics. How has East Asia fared under modern democracy? Not well, I would think, even if the alternatives would have been worse.

Then there was the display of rigid social hierarchy based on seniority in age (and supposedly experience, but not necessarily merit). Or it could be bad experience and bad judgment, as exemplified by Hilary Clinton. Can South Korea do away with that social hierarchy and remain (neo-)Confucian? More on that when I finish my post on democracy in China (and East Asia).

While there is a hint to corruption in politics and the legal system, the movie is probably not realistic in its depiction of that corruption. (There are probably better, more realistic movies that deal with the partnerships between politicians and gangsters.) By the last 30 minutes I was sitting to the end, with the wrong kind of stamina. There are no clear good guys in the movie; even those who are interested in bringing down the corrupt mayor have questionable motives, and it is suggested that they are merely following orders from another faction jockeying for control. It's just a lot of evil that ends in a lot of death. Not an uplifting movie, though this is not abnormal for Korean cinema. Does the story qualify as a tragedy? And even if it did, would it be worth watching? I am inclined to say no.

The best part of the movie for me? The use of Robert Plant's arrangement of "Satan Your Kingdom Must Come Down"

Posted by papabear at 4:07 PM No comments:

Crisis Magazine: The Profoundly Politically Incorrect John Zmirak by Austin Ruse
Posted by papabear at 9:49 AM No comments:

What state is capable of pulling it off?

Nullification vs. Secession? by John Marquardt
Posted by papabear at 12:00 AM No comments:

The Revolution in the Democratic Party

A Farewell Performance of “The Twins” by Thomas E. Watson
Posted by papabear at 12:00 AM No comments: